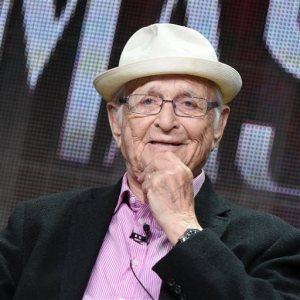 FILE – In this Aug. 1, 2015 file photo, Norman Lear speaks onstage during the “American Masters: Norman Lear” panel at the PBS 2015 Summer TCA Tour held at the Beverly Hilton Hotel in Beverly Hills, Calif. Legendary TV producer Lear believes there is still a place for shows to explore race relations issues in the same manner as his famed sitcoms “All in the Family” and “Good Times.” Lear, a champion of television diversity, took part in a panel discussion about race and American culture on Monday night, Nov. 30, 2015, at Morehouse College celebrating the 40th anniversary of his sitcom “The Jeffersons.” (Photo by Richard Shotwell/Invision/AP, File)

ATLANTA (AP) — Legendary TV producer Norman Lear believes there is still a place for shows to explore race relations issues in the same manner as his famed sitcoms “All in the Family” and “Good Times.”

Lear, a champion of television diversity, took part in a panel discussion about race and American culture on Monday night at Morehouse College to celebrate the 40th anniversary of another one of his classic sitcoms, “The Jeffersons.” The show’s 10-year run ended in 1985. It starred the late Sherman Hemsley as George Jefferson, a feisty, bigoted owner of a chain of dry-cleaning businesses.

Several joined Lear in the discussion, from Marla Gibbs, who played the wise-cracking maid Florence on the show, to actresses Kim Fields and Keisha Knight-Pulliam, as well with veteran casting director Reuben Cannon and Usher.

Usher wasn’t old enough to watch the “The Jeffersons,” ”Sanford and Sons” or “All in the Family” when they were on the air. But the singer said watching the reruns of those shows filled a major void for him.

“Realistic television and sitcoms became very valuable to me, because I was raised without a father,” Usher said. “So I looked to these shows for an idea of a family structure. … I found a connection there with those shows.”

Throughout his career, Lear confronted war, sexuality, abortion and poverty with topical humor on many of his shows. The 93-year-old Lear, who also read from his memoir “Even This I Get to Experience,” is working on a Hispanic version of his single-parent comedy “One Day at a Time.” But he said there are more stories that should be told by a new generation of writers and filmmakers to spark more conversations.

“That’s what the whole American experiment is all about: Talking together. Finding the solution to the problem, being helped by literature, theater and so forth.”

Lear said current shows like “Black-ish” have followed suit, commending the sitcom for tackling the N-word controversy head on. He said that one particular episode created a series of dialogue between many, which needs to happen more.

“We’re crazy not to talk about it, and get rid of it once and for all,” he said.

He recalled how “The Jeffersons” helped Russell Simmons at a young age before he became a well-known music mogul.

“He talked about how he saw George Jefferson writing a check,” Lear said. “At that time, he didn’t know a Black man could write a check. It was a big moment in his young life. It wasn’t the glitz of a hit TV show. It was the moments that made them feel whole.”