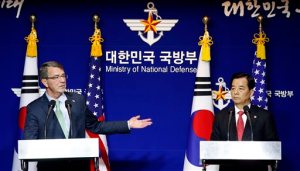 U.S. Defense Secretary Ash Carter, left, answers a reporter’s questions during a joint news conference with South Korean Defense Minister Han Min Koo after the 47th Security Consultative Meeting (SCM) at Defense Ministry in Seoul, South Korea, Monday, Nov. 2, 2015. The U.S. and South Korea are pledging to strengthen their combined defenses against what they call threats by North Korea, but they announced no specific new steps toward a long-delayed transfer of wartime control of South Korean forces from the U.S. military to the South Korean government. (AP Photo/Lee Jin-man, Pool)

WASHINGTON (AP) — The U.S. military must harness the best talent and keep up its technological edge in order to meet the evolving security challenges of the 21st Century, Defense Secretary Ash Carter said Wednesday as he rolled out a series of initiatives aimed at attracting the next generation of service members and dragging the often-antiquated Pentagon bureaucracy into the 21st century.

America’s fighting force, he said, must work to stay competitive as other countries like Russia and China try to close the technology gap.

“We live in a changing and competitive world, and we have to earn that excellence again and again,” said Carter. “Because our force of the future has to be just as great, if not even better, than our outstanding force of today. Our security depends on it.”

The plans, detailed in a speech at George Washington University Wednesday, reflect Carter’s oft-stated goal of modernizing the bureaucracy and encouraging more talented young people to consider the military as a career. Many of the changes would align the Pentagon with the corporate world, as Carter tries to strengthen ties with high-tech companies and bring the best from that field into the his department.

For example, members of the military will be able to start investing in a 401(k)-type retirement plan beginning in January 2018, and there will be a push to expand sabbatical programs and allow service members more easily can move from active duty to the reserves. Doing so will give military members them a chance to take a break, seek advanced schooling, internships or other work and eventually bring that experience back to the Pentagon.

“While the military cannot and should not replicate all aspects of the private sector, we can and should borrow best practices, technologies, and personnel management techniques in commonsense ways that work for us so that in future generations, we’ll keep attracting people of the same high caliber we have today,” Carter said.

Officials said the personnel changes are the most significant since the all-volunteer force was implemented. And they would impact the more than 1.3 million men and women in the active-duty military, about 826,000 in the National Guard and Reserves. They also would allow the department to bring in high-tech civilian experts for short periods of time.

Many of the nearly two dozen initiatives can easily be put in place, and leaving for more study and debate most of the more complex or controversial changes to the promotion system and expansion of benefits for women

The retirement change, long discussed and recommended by independent commissions, would allow service members to participate in a 401(k)-type plan, so that if they serve fewer than 20 years they can leave with a small nest egg. According to officials, more than 80 percent of the people who enlist in the military leave before they reach 20 years — receiving no retirement payout.

Critics have suggested that providing some retirement plan for those who stay five years or 10 years might encourage more people to leave early, draining the department of key personnel. But one senior official said the change would get the department to a place where deciding to stay in the service would not be dictated solely by financial concerns.

It also would let the services better choose who should stay and who should go, rather than allowing someone with 15 years in service stay on only because they needed five more years to get the retirement pay.

Anyone joining the military after Jan. 1, 2018, would have a defined retirement benefit plan as well as a 401(k)-type plan. The department would begin matching contributions, up to 5 percent, after three years. No one now in the military would have to participate in the contribution plan, but those with fewer than 12 years in the service could choose to join.

The sabbatical plan would expand and make permanent a pilot program that allows service members to leave their job for a year or two to have a child, go to school or get an internship, and then return without affecting their career. Although the program has gotten good reviews from those who used it, many service members are reluctant to participate because they are afraid it will delay or derail promotions or shuttle them into less favorable jobs.

This expansion would require congressional approval.

A new study will focus on how to better provide incentives to recruiters that take into account whether recruits finish their initial service commitment. Carter also wants to look at ways to expand the pool of young people who consider the military as a career, even as the military faces escalating conflicts in Iraq and Syria, and challenges from China, Russia, North Korea and Iran.

More than 60 percent of current recruits come from the South, and many of them are from families with military backgrounds.

Among the other initiatives:

—a study on basic and specialty pay.

—requiring exit interviews for service members to get a better understanding of why people leave the military.