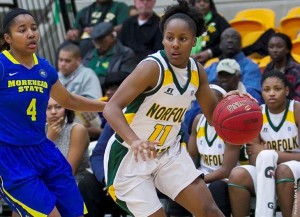 NORFOLK, Va. – The Norfolk State women’s basketball team (0-1) plays its first road game of the 2015-16 season at the University of Virginia (1-0) on Monday night. The game tips off at 7 p.m. from John Paul Jones Arena.

Kayla Roberts had her ninth career double-double with 11 points and 11 rebounds to pace the Spartans, but she was limited to 4-of-15 shooting. Koryn Lawrence battled foul trouble early, but still scored 10 points on 5of-7 shooting. Yazmen Hannah chipped in with nine points for NSU, which shot just 35.5 percent from the floor.

Scouting Virginia: The Cavaliers are coming off a 70-66 road win at Middle Tennessee on Friday that featured a balanced attack. Lauren Moses scored a team-high 13 points to lead five U.Va. players in double figures. Breyana Mason scored 11 points, while Mikayla Venson, J’Kyra Brown and Aliyah Huland El had 10 apiece. The Cavaliers outrebounded MTSU 42-34 and held the Blue Raiders to 37 percent shooting. U.Va. was picked to finish eighth in the Blue Ribbon Panel ACC Preseason Poll, while senior guard Faith Randolph was picked to the preseason All-ACC Team. The Cavaliers are coming off a 17-14 season in which they fell in the first round of the WNIT.

All-Time Series vs. Virginia: NSU leads the all-time series with U.Va., 5-4, but has lost the last two meetings. In fact, the teams have met just once since the 1980-81 season, that coming on Dec. 28, 2012 at the Cavalier Classic. The Cavaliers held NSU to a program record-low 23 points in a 66-23 win in Charlottesville that evening, led by 16 points from Simone Egwu. Quineshia Leonard had nine points and 18 rebounds to lead the Spartans.

NSU is 8-15 all-time against teams in the ACC, but all the wins came prior to 1980 when the Spartans were in Division II.

Promising Start for Hannah: The Spartans had four players make their debuts in an NSU uniform on Friday. Freshman guardYazmen Hannah led the way among the newcomers with nine points, three rebounds and two assists off the bench in 24 minutes of play. She also added a block and a steal, and hit both of NSU’s 3-pointers in the game. Hannah was a high-scoring all-state guard at Hickory (N.C.) HS last year, finishing as runner-up in North Carolina 3A State Player of the Year voting.

NSU also got a nice showing from La Salle graduate transfer forward Siobhan Beslow, who started and had eight points, four rebounds and three steals in 33 minutes of play.