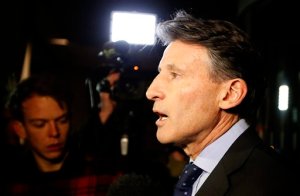 IAAF President Sebastian Coe gives a statement to journalists outside his office in London, Friday, Nov. 13, 2015. Russia’s track and field federation has been suspended by governing body IAAF.(AP Photo/Frank Augstein)

LONDON (AP) — The Latest from the IAAF investigation (all times local):

The Russian track federation admits it is has many problems but insists it has made significant progress on reforms despite Friday’s ban.

Federation general secretary Mikhail Butov tells reporters “we know that we have problems, not a few of them, and we have taken real steps to correct them. … We’ll keep moving.”

Butov adds that he expects Russia to be able to compete at next year’s Olympics and that his motivation is for Russia’s “clean athletes to compete internationally.”

The leader of the U.S. Anti-Doping Agency called today’s decision by IAAF, “the only outcome acceptable to clean athletes.”

“While it is somewhat promising,” said Travis Tygart, the CEO of USADA, “the real test now is to ensure full justice and accountability for all their actions before being allowed to compete again.”

Russia’s council member at the IAAF, Mikhail Butov, says the length of his country’s ban from track and field will depend on how convincingly Russian representatives can make the case that they have reformed.

Addressing reporters outside the federation offices following the IAAF’s teleconference meeting, which voted 22-1 to suspend Russia, Butov says “the period (of suspension) is unfortunately not prescribed and therefore will depend on how convincing we are with our case and how objective the commission is … We’ll work with them.”

Butov was part of the teleconference but did not vote.

The United States’ representative on the IAAF council called suspending the Russian track team “the only proper course of action.”

Stephanie Hightower, the president of USA Track and Field, was one of 22 council members to cast a “yes” vote in favor of banning Russia from international competition, which could include next year’s Olympics.

“The IAAF has an obligation to protect athletes, and this action sends a clear message to clean athletes that protecting them and protecting the sport, with a culture of accountability, is our top priority,” Hightower said.

She said she hopes the IAAF will implement World Anti-Doping Agency recommendations to put in place an ombudsman and compliance officer.

She called the independent commission report “clear in its evidence and unequivocal in its recommendations.”

Russian Sports Minister Vitaly Mutko has slammed Russia’s suspension from track and field as “very strange,” saying the IAAF should have focused on its own legal problems instead.

Mutko tells The Associated Press in a telephone interview that “our reaction is calm. We didn’t expect anything else,” and that the suspension could be lifted in time for the world indoor championships in Portland, Oregon, in March.

With the IAAF’s former president under investigation by French prosecutors investigating corruption and money-laundering charges linked to the IAAF, Mutko says its priorities should have been elsewhere.

He says banning Russia at this time “looks very strange.”

Russia’s track and field federation has been provisionally suspended by the sport’s governing body following damning allegations of state-sponsored doping.

The decision by the IAAF’s ruling council will keep Russian track and field athletes out of international competition for an indefinite period — possibly including next year’s Olympics in Brazil.

A World Anti-Doping Agency committee has found Russia’s anti-doping agency non-compliant with the anti-doping code and also concluded that violations discovered on the Russian track team could be taking place in other sports.

WADA’s compliance review committee looked at the report issued by an independent committee earlier this week and also gave the Russian agency, known as RUSADA, a chance to respond.

Text of the decision was provided to The Associated Press by a person with access to the findings, who was not authorized to speak publicly about them.

The committee’s findings will go to the WADA foundation board, which will vote on it at its meeting next Wednesday.

If RUSADA is declared noncompliant by the full board it could, among other things, cost Russia the chance to host international events.

Russian Sports Minister Vitaly Mutko has accused the IAAF of concealing more than 150 doping cases, mostly from countries other than Russia.

He says “the IAAF since 2008 or 2009 hid not just Russian athletes’ samples but 155 cases that they then pulled out with about 15 of our athletes.”

Mutko did not clarify exactly which cases had been hidden, although he mentioned that they included Russian race walkers Olga Kaniskina and Valery Borchin.

Both of those two were banned this year for violations of the athlete biological passport system, which tracks blood values to look for signs of doping, but their cases took years to resolve.

Monday’s report into Russian doping by a World Anti-Doping Agency commission said the Borchin case was “highly suspicious” because of “excessive” delays in its handling by the IAAF.

Isinbayeva, who won gold at the 2004 Athens Olympics and the 2008 Beijing Games, wrote a letter published on the Russian track federation’s website hours before the IAAF was to decide on whether to ban the country from competition.

Isinbayeva says “all my victories are honest, ‘clean’ and deserved. I have always followed and am following all the anti-doping rules precisely. The situation the Russian national team is in now is very sad but I ask you not to treat all the athletes in the same negative way.”

She says “to ban innocent … athletes from competing in international events and (the) Olympic Games in Rio is not fair.”

Senior Russian officials have been lobbying hard in recent days as they try to avoid being banned from track and field.

Track’s governing body will decide Friday on whether to suspend Russia, which could lead to a possible ban from next year’s Olympic track events.

The most visible lobbyist is Sports Minister Vitaly Mutko, a longtime ally of President Vladimir Putin.

On Thursday, Mutko told The Associated Press that he was in contact with IAAF President Sebastian Coe and the World Anti-Doping Agency, and he now says he will speak Friday with International Olympic Committee President Thomas Bach.

Russia is offering “broad cooperation” to reform its anti-doping operation as it tries to avoid a ban from Olympic track and field.

That’s the message from Russian Sports Minister Vitaly Mutko ahead of a key decision Friday on whether Russia should be barred from track and field competition because of its doping scandal.

Mutko, in comments to Russia’s R-Sport agency, says “we are prepared to re-certify the laboratory, or to reform, or to create a new anti-doping organization, we’re prepared for broad cooperation.”

Ahead of Friday’s decision as to whether Russia should be suspended from competition, the government has adopted a conciliatory tone while remaining critical of a World Anti-Doping Agency commission’s report alleging a vast state-sponsored doping program.

On Thursday, Mutko told The Associated Press that Russia has no intention of boycotting next year’s Olympics even if its track team is barred.