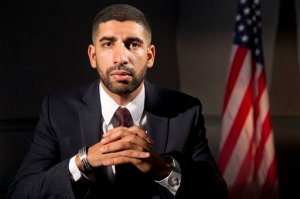 In this photo taken Oct. 20, 2015, former Army Captain Florent Groberg poses for a portrait at the Pentagon. President Obama will present him with the Medal of Honor on Nov 12, which will make Groberg the 10th living recipient of the nations highest military award for actions in Afghanistan. (AP Photo/Jacquelyn Martin)

ARLINGTON, Va. (AP) — He tackled a suicide bomber while serving in Afghanistan, saving fellow soldiers’ lives while suffering a gruesome leg injury. During three years of recovery and more than 30 surgeries at Walter Reed National Military Medical Center, Army Capt. Florent Groberg was left with a lot of time to think.

“You go through your little demons,” Groberg said in an interview at the Pentagon, where he now works as a civilian. “‘Why am I here when four guys are not? Why are four incredible, family men not here and I am? Did I do everything I was supposed to do? Did my guys do everything they were supposed to do? What do I do now?'”

Florent Groberg’s tale of heroism is not a neat and tidy one. On Thursday, President Barack Obama will present him with the Medal of Honor, which will make Groberg the 10th living recipient of the nation’s highest military award for actions in Afghanistan. But it won’t change the fact that the day he became a hero was the worst day of his life.

On Aug. 8, 2012, the day the suicide bombers attacked, Groberg was deployed to Afghanistan. He and Sgt. 1st Class Brian Brink led a personal security detachment that was responsible that day for escorting then-Col. James Mingus, now a brigadier general assigned to Fort Carson, Colorado, to a meeting with an Afghan provincial governor.

Both Groberg and Brink said the entire team had a feeling of unease about the mission that particular day.

“It was just in the air. It’s hard to explain,” Brink said in a phone interview. “It was a family, that’s the best way to describe the closeness of the team. … We’re so well connected that what one person is feeling, everyone is feeling.”

The first tangible sign of danger came when two motorcyclists approached the unit, starting to cross a narrow bridge. But they dismounted the motorcycles on the bridge, and retreated on foot. Shortly thereafter, Groberg saw an Afghan man walking toward his detail. Groberg said it was clear to him almost immediately that the man was a suicide bomber, and that he had his thumb on a “dead man’s trigger” that would detonate if he released his grip.

Groberg said his training kicked in immediately and he shoved the man as far away from the security detail as possible and tackled him to the ground, with assistance from another soldier in the security detail, Sgt. Andrew Mahoney.

He said his actions in that moment were a combination of instincts and training.

“You just react. You don’t have time to analyze the situation,” Groberg said. “It’s a threat — got to get him away from the boss. Everybody would react the same way. Mahoney reacted the exact same way. He went right with me.”

It was while the man was on the ground that his vest detonated. The explosion killed Griffin, Kennedy, Gray and Abdelfattah. It also caused a second suicide bomber to detonate his vest prematurely.

Brink said he came within a beat of shooting the suicide bomber but was forced to hold off when Groberg stepped in to tackle the man. Brink believes the casualties would have been far worse if he had shot the bomber, because his vest was facing the security detail.

“The scenario that we faced, somebody was going to die that day,” Brink said. “The way the events played out, it was probably the best possible outcome. Had I actually shot him, it would have been far worse.”

It was Brink who retrieved the badly wounded Groberg and carried him to the medic.

“His leg — I looked down, and the back half of his calf, it’s gone,” Brink said. He dragged Groberg to a ditch where the medic, who had also been wounded, began administering care from what turned out in Groberg’s case to be an agonizing, three-year recovery process.

Groberg, who ran track at the University of Maryland and at Walter Johnson High School in Bethesda, Maryland, can’t really run at all any more due to his injuries. But he credits the doctors and nurses at Walter Reed in Bethesda with getting him to where is today.

And he has accepted the fact that he and his team did the best they could under the circumstances.

“My team did everything we were supposed to do and I could not be more proud of them,” he said. “We met our enemy and our enemy tried to harm us. They did, but we still won the battle. … We’re still here.”