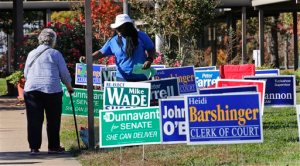 Election volunteer Wenwu Mulbah, of Richmond, center, hands out Republican sample ballots at a polling place in Richmond, Va., Tuesday, Nov. 3, 2015. Democrats look to regain control of the state Senate in today’s with both parties spending huge amounts of cash in two key districts, one in Richmond and one in Northern Virginia. (AP Photo/Steve Helber)

Hello! Here’s a look at how AP’s general news coverage is shaping up today in Virginia. Questions about today’s coverage plans are welcome, and should be directed to the Richmond bureau at 804-643-6646 or aprichmond@ap.org.

A reminder this information is not for publication or broadcast, and these coverage plans are subject to change. Expected stories may not develop, or late-breaking and more newsworthy events may take precedence. Advisories, digests and digest advisories will keep you up to date.

Some TV and radio stations will receive shorter APNewsNow versions of the stories below, along with all updates.

RICHMOND — Three Virginia police officers repeatedly used stuns guns on a man who later died in their custody, according to recently released video that has brought new attention to the case from May 2013. The video, first obtained by MSNBC, shows the officers in South Boston, Virginia, repeatedly shocking Linwood R. Lambert Jr. after he ran from a police cruiser to the doors of an emergency room and again when he’s back in the cruiser, restrained in the back seat. By Alanna Durkin. SENT: 430 words.

RICHMOND — A judge has denied bond for two Virginia men accused of trying to buy weapons to attack synagogues and black churches. U.S. Magistrate Roderick Young said Thursday that 34-year-old Robert C. Doyle and 33-year-old Ronald Beasley Chaney III would pose a danger to the community if released. The men have been in custody since their arrests Sunday. By Larry O’Dell. SENT: 130 words. Will be updated.

ROANOKE — Advance Auto Parts Inc. reported a dip in its third-quarter profit, a disappointing outlook and disclosed CEO Darren R. Jackson will retire in January. Jackson cited the costs related to integrating General Parts International and a stronger U.S. dollar as factors in weighing down results for the quarter. The third-quarter “shortfall” partly prompted the company to cut its guidance. SENT: 370 words.

RICHMOND — A plan to build a wheelchair ramp outside the Virginia Executive Mansion is turning into a tussle between Gov. Terry McAuliffe and former first lady Roxane Gilmore. The Richmond Times-Dispatch (http://bit.ly/1MLQBRy ) reports that Gilmore, the wife of former governor and current Republican presidential candidate Jim Gilmore, has circulated a letter among historic preservationists in which she characterizes the planned ramp as unnecessarily intrusive on the nation’s oldest continuously occupied governor’s residence.

— CHRISTIANSBURG DEATH TRIAL: The trial of a woman charged in the killing of her former father-in-law is underway in Christiansburg.

— ODU-LEGISLATOR: The U.S. Supreme Court has declined to review the case of a former Virginia delegate who has been convicted on federal corruption charges.

— LUXURY RESORT-EAGLES: A luxury resort proposed for a Rappahannock River site where hundreds of bald eagles gather has taken one step forward.

— INMATE DEATH: Police are investigating the death of an inmate found hanging in his cell at the Newport News City Jail.

— ALPHA NATURAL RESOURCES-BANKRUPTCY: Alpha Natural Resources founder, chairman and CEO Michael J. Quillen and other retirees are objecting to the coal operator’s plan to terminate their health care and other benefits.

ATLANTA — The Frank Beamer Farewell Tour begins at Georgia Tech, where his Virginia Tech Hokies hope to move a step closer to a 23rd straight bowl appearance for their retiring coach. The Yellow Jackets are on the verge of having their own bowl streak snapped after losing six of seven. By Paul Newberry. UPCOMING: 700 words, photos. Game starts at 7:30 p.m.

MARKETPLACE: Calling your attention to the Marketplace in AP Exchange, where you can find member-contributed content from Virginia and other states. The Marketplace is accessible on the left navigational pane of the AP Exchange home page, near the bottom. For both national and state, you can click “All” or search for content by topics such as education, politics and business.