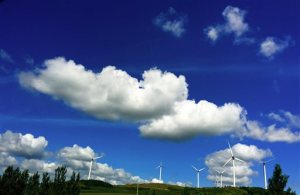 In this July 30, 2015 photo, wind turbines are built on a hill along a highway near Jiamusi, in northeastern China’s Heilongjiang province. Heading into this months Paris climate meeting, China, the worlds biggest source of climate-changing gases has yet to accept binding limits. But it has invested in solar, wind and hydro power to clean up its smog-choked cities and curb surging demand for imported oil and gas. (AP Photo/Andy Wong

BEIJING (AP) — China has changed course and emerged as a leader in curbing greenhouse gas emissions six years after it was accused of obstructing the last high-level climate talks in Copenhagen.

Heading into this month’s Paris meeting, the world’s biggest source of climate-changing gases has yet to accept binding limits. But it has invested in solar, wind and hydro power to clean up its smog-choked cities and curb surging demand for imported oil and gas. That contributed last year to a surprise fall in coal consumption.

Beijing “recognizes it should take a different responsibility than a few years ago,” said Li Shuo, senior climate officer for Greenpeace East Asia.

China’s status as the leading source of emissions makes its cooperation essential for any global climate deal to succeed.

Until now, China has been exempt from limits. But pressure on Beijing intensified as its share of world carbon output rose last year to 28 percent, double the U.S. level. Forecasts show its historic total will soon pass the United States as the biggest.

Washington and Beijing “had fundamental disagreements in Copenhagen” over China’s obligations, said Li. “I think this has been resolved over the past two years.”

Without a formal commitment, China is making faster progress than most countries as a side effect of Communist Party efforts to nurture more self-sustaining growth based on consumer spending and technology instead of trade and energy-hungry heavy industry.

Pollution has “created immense and escalating social pressures for change,” said researchers Fergus Green and Nicholas Stern in a June report for the Grantham Research Institute on Climate Change and the Environment at the London School of Economics.

In 2005, communist leaders launched a campaign to improve efficiency in an economy that devours two to three times as much energy as the United States, Europe or Japan per unit of output. Older power plants and steel mills were closed. Utilities were ordered to invest in wind turbines and gas-fired generation.

Last year, China spent $83.3 billion on renewables, or nearly one-third of the global total, according to a report by the Frankfurt School and the U.N. Environment Program. The United States was a distant second at $38.3 billion.

The slowdown in steel and other heavy industries has prompted suggestions China can beat its 2030 deadline.

“Emissions are likely to peak by 2025, and could well peak even earlier than that,” said Green and Stern in their report. “China’s emissions could fall strongly after their peak.”

China has reduced carbon intensity, or emissions per unit of economic output, by 33.8 percent from 2005 levels, the Cabinet planning agency said in a June letter to the Paris organizers.

That is “a greater rate than most other countries have ever been able to achieve,” said Xiaochen Zhang, associate director for climate change of the group Business for Social Responsibility, in a report in October.

In Copenhagen in 2009, some participants complained China and India stymied global emissions reduction efforts, possibly for fear they might hamper economic growth.

“China wrecked the Copenhagen deal,” wrote an aide to one negotiator in The Guardian newspaper.

Since then, growth of renewables has allowed China to raise economic output without boosting emissions.

China leads the world in hydro and wind capacity and is No. 2 behind Germany in solar, according to the Renewable Energy Policy Network for the 21st Century, a Paris-based alliance of environmental groups.

Last year’s coal consumption fell 2.9 percent while the economy grew 7.4 percent, according to the National Bureau of Statistics. It was the first reduction in 14 years, according to the China National Coal Association, an industry group.

Still, China is forecast to rely on coal for at least 60 percent of its power for the foreseeable future.

China accounted for 80 percent of new coal generating capacity worldwide over the past decade, according to Greenpeace.

“The extreme growth of coal power generation, especially in China, undercuts many successes with renewables,” said the group in a report.

The Chinese Cabinet’s energy plan through 2020 promises to hold coal’s share of energy to 62 percent, down from last year’s 66 percent.

It calls for doubling the share of energy from non-fossil fuels to 20 percent by 2030. But that will only bring China into line with today’s global average.

And Beijing has yet to say how high emissions might be allowed to rise before the 2030 peak.

It is too early to assume last year’s decline in coal use is permanent, said Greenpeace’s Li. He said Chinese leaders might face pressure in coming years to stimulate China’s cooling economy by launching resource-intensive construction projects.