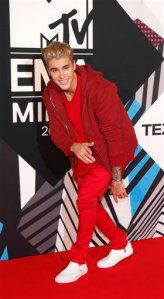 “It’s been a long couple of years. I just feel it’s awesome to be recognized for my music,” Bieber, who was up for six awards, told the crowd.

Clad in a boyish red ensemble, Bieber performed his single “What Do You Mean?” for screaming fans — many of whom surely helped him win the best fans category — inside the Mediolanum Center in Italy’s fashion capital of Milan.

“Make some noise!” he exhorted the crowd as he sang, as if they needed to be told.

As he picked up his award for best collaboration, Bieber said “it’s been a pretty good night.” By the time he took the fifth award, for best look, he just said “Wow.”

“I don’t know what to say, I got these looks from my mamma,” Bieber added.

Host Ed Sheeran had a busy night, keeping the show going with co-host Ruby Rose, performing with Rudimental on their hit “Lay It On Me,” and taking home two awards himself, for best live act and best world stage.

Taylor Swift, who led all artists with nine nominations, took just one prize, best song, for “Bad Blood,” featuring Kendrick Lamar. Rihanna won best female performer while Nicki Minaj took best hip hop. One Direction won for best pop group, preventing Bieber from sweeping all the awards for which he was nominated. None of those acts were on hand to accept, and only Minaj sent along a video “thank you.”

Best video went to Macklemore & Ryan Lewis, who opened the show with their award-winning song “Downtown,” with Eric Nally flying against a full moon backdrop. They thanked fans for supporting their music without the backing of a big label.

Pharrell Williams closed out the ceremony, singing a rousing rendition of his anthem “Freedom” with dancers in brightly colored swing skirts. As the broadcast wrapped up, cameras cut to the Piazza Duomo in Milan’s center, where fans unfurled a huge “Freedom” banner to raise awareness about Europe’s refugee crisis.

“Music lovers around the world, when we started, there was us and MTV, and we blazed a trail and we were there for each other,” Simon Le Bon told the crowd.

Andrea Bocelli made his MTV EMA debut, lulling the Italian crowd into a sing-along of his hit “Con te partiro” before singing a duet with best newcomer nominee Tori Kelly.

“It’s been such an honor just to be around him and just see how he works and it’s really cool to see his wife and kids,” Kelly said on the red carpet, calling it “a huge honor” to share the stage with Bocelli.

The awards ceremony travels to a different European city each year and winners are selected by fans across the continent.

Louise Dixon contributed to this report.