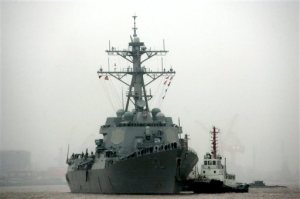 In this April 8, 2008, file photo, guided missile destroyer USS Lassen arrives at the Shanghai International Passenger Quay in Shanghai, China, for a scheduled port visit. Just two days after the USS Lassen sailed past one of China’s artificial islands in the South China Sea in a challenge to Chinese sovereignty claims, Defense Ministry spokesman Col. Yang Yujun said Thursday that China will take “all necessary” measures in response to any future U.S. Navy incursions into what it considers its territorial waters around the islands. (AP Photo/Eugene Hoshiko, File)

THE HAGUE, Netherlands (AP) — An international tribunal ruled Thursday that it can take on a case between China and the Philippines over disputed territory in the South China Sea, overruling objections from Beijing that the arbitration body has no authority to hear the case.

The Philippine case, which was filed before the tribunal in The Hague in January 2013, contends that China’s massive territorial claims in the strategic waters do not conform with the 1982 U.N. Convention on the Law of the Sea and should be declared invalid. The Philippines also asserts that some Chinese-occupied reefs and shoals do not generate, or create a claim to, territorial waters.

The tribunal said it has authority to look into seven issues raised by the Philippines against China but added that its jurisdiction over seven others “will need to be considered in conjunction with the merits.” It asked Manila to clarify one other issue.

It said it has set hearings and expects to hand down a decision on the case next year.

China, the Philippines and four other governments have overlapping claims across the vast South China Sea, with Beijing claiming it has sovereignty over virtually all of the waters. Some of the disputed areas are believed to sit atop vast undersea deposits of oil and gas and straddle some of the world’s busiest sea lanes.

The tribunal, which conducts its hearings behind closed doors, said the Philippines has stressed it is not asking arbitrators “to decide the question of sovereignty over maritime features in the South China Sea that are claimed by both the Philippines and China” or rule on maritime boundaries in the region.

China has declared it would not take part in the arbitration, insisting on one-on-one negotiations with smaller rival claimants which analysts say would give it advantage because of its sheer size and clout.

After Thursday’s ruling, China reiterated its position of not accepting or participating in the arbitration.

“The attempts to attain more illegal interests by initiating arbitration unilaterally is impractical and will lead nowhere,” said Zhu Haiquan, spokesman for the Chinese Embassy in Washington. “China is committed to resolving relevant disputes through negotiation and consultation with parties directly involved. This is the only right choice.”

The long-simmering disputes have strained relations and sparked fears that it could ignite Asia’s next major conflict. China’s move to undertake massive construction to transform at least seven shoals and reefs into islands in the South China Sea’s Spratly Islands have ratcheted up tensions.

Earlier this week, a U.S. guided missile destroyer sailed within 12 nautical miles (22-kilometer) of one of China’s artificial islands to underscore Washington’s position that the geographic alteration would not allow the previously submerged reef to generate territorial waters.

The U.S. Navy sail-past provoked angry Chinese reactions but was welcomed by America’s allies, including the Philippines and upheld by others like Vietnam, which has also been locked in a bitter territorial feud with China.

On Thursday, a Chinese Defense Ministry spokesman said the country’s military will take “all necessary” measures in response to any future U.S. Navy incursions into what it considers its territorial waters around islands in the South China Sea.

The United States noted that the final decision by tribunal — not expected until next year — would be legally binding on both the Philippines and China.

State Department spokesman John Kirby said the U.S. does not take a position on the competing sovereignty claims in the South China Sea, but it opposes coercion and wants all of the disputes to be resolved “peacefully, diplomatically and through international legal mechanisms such as arbitration.”