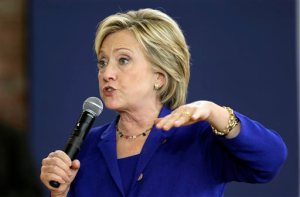 In this Sept. 22, 2015, photo, Democratic presidential candidate Hillary Rodham Clinton speaks during a community forum on healthcare at Moulton Elementary School in Des Moines, Iowa. The Human Rights Campaign says Vice President Joe Biden will be the keynote speaker for its annual dinner. The national gay rights group is hosting the dinner Oct. 3 in Washington. The speech is a major opportunity for Biden to demonstrate his support among LGBT voters. Biden is considering running for president in 2016 but hasnt announced a decision. Clinton plans to speak to the groups board and staff at a breakfast session. (AP Photo/Charlie Neibergall)

The Democratic presidential candidate said in a statement she had “serious concerns” with the proposed acquisition of Cigna by Blue Cross-Blue Shield insurer Anthem, and plans by Aetna to acquire Medicare Advantage coverage provider Humana.

Clinton said the planned merger between Anthem and Cigna could raise market concentration in New Hampshire — home of the nation’s first presidential primary — to “excessive levels.” She said both deals would concentrate competition in other U.S. markets.

Anthem plans to buy Cigna for $48 billion, while Aetna wants to acquire Humana for about $35 billion in a wave of consolida

tion within the health insurance industry.

Before the deals can close, the Justice Department must decide whether the mergers would make the companies so dominant that they could create a competitive imbalance. That review is expected to last several months.

Clinton said she is skeptical that consumers would benefit because “too often the companies end up pocketing profits rather than passing savings to consumers.”

Clinton said if elected she would strengthen the antitrust enforcement arms of the Justice Department and the Federal Trade Commission and appoint “aggressive regulators” to address concentration in the health care industry and other sectors.

Copyright 2015 The Associated Press. All rights reserved. This material may not be published, broadcast, rewritten or redistributed