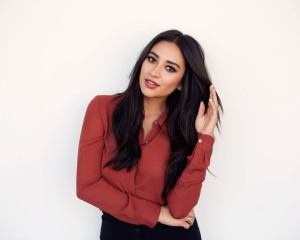 In this Oct. 6, 2015 photo, actress and author Shay Mitchell poses for a portrait in New York to promote her new book “Bliss,” a novel she wrote with her best friend. Mitchell will also star in an upcoming film with Jennifer Aniston called, “Mother’s Day.” (Photo by Taylor Jewell/Invision/AP)

“I think you get to that certain point where at times you are very certain of where you’re wanting to head or what career you’re wanting to do, and then other times you’re like, ‘Oh my gosh, I’m 25. What am I doing?'” she said in a recent interview.

The actress, 28, recalls feeling anxiety over her own future before getting the role of Emily Fields on ABC Family’s “Pretty Little Liars,” which premiered in 2010.

“I was working as a cocktail waitress in Toronto; had recently broken up with my boyfriend,” she said. “I didn’t know if I wanted to stay in Toronto or move back to Vancouver where my parents and friends were. It was really tough.” Mitchell says she wanted to pursue acting and used vision boards to help her stay focused on her goals. Shortly after, she auditioned for “PLL,” as fans call the show.

Mitchell has teamed up with her best friend, Michaela Blaney, to write “Bliss,” the story of three friends in their twenties who are trying to find their own happiness through ups and downs.

She says the idea came out of a gab session in her living room when they began to take notes on a white board.

“We wrote all of these different things down from our lives and we stepped away from it, looked at the board and realized this was a lot of content,” she said. “We could put this in a book and share some of our stories, our life experiences and our life lessons in it.”

Mitchell says the book is “loose fiction,” with some stories and characters exaggerated or made up.

She also recently shot scenes for a movie called “Mother’s Day,” due out next spring, with intersecting stories about different moms on Mother’s Day.

Directed by Rob Marshall, Mitchell plays a stepmother married to Timothy Olyphant, whose ex-wife is played by Jennifer Aniston.

“I caught myself quite a few times looking at Jennifer. … just having to pinch myself, you know, in character. It was fun and just such a dream come true,” she said.

She is currently on hiatus from filming “Pretty Little Liars,” which returns with new episodes on Jan. 12 (8 p.m. EST) on ABC Freeform. (ABC Family will change its name in the new year.)

Mitchell says she’s enjoying how “Bliss,” ”Mother’s Day” and the upcoming episodes of “PLL” all let her be the adult she is.

“All that combined just happened at a really beautiful time. It was like, ‘OK, this is your chance now. You are gonna play closer to your age.’ And, um, who knows? In the future I might want to be going in the opposite direction,” she laughed.