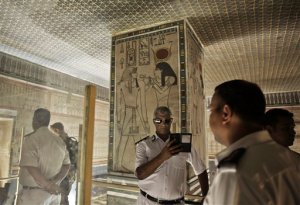 FILE – In this Tuesday, Sept. 29, 2015 file photo, a policeman takes a selfie at the Amenhotep II tomb in the Valley of the Kings in Luxor, Egypt. Egypt’s antiquities minister says King Tut’s tomb may contain hidden chambers, lending support to a British Egyptologist’s theory that a queen may be buried in the walls of the 3,300 year-old pharaonic mausoleum. (AP Photo/Nariman El-Mofty, File)

BERLIN (AP) — Scientists say they have extracted ancient DNA from the skull of a man buried in the highlands of Ethiopia 4,500 years ago that supports the theory that Eurasian farmers migrated into Africa some 3,000 years ago.

This Stone Age resettlement had previously been theorized, but the rare find allowed scientists to see what DNA looked like well before the time the migration would have taken place. A comparison with modern populations around the world allowed them to see that the migrants left their genetic mark in the furthest corners of Africa.

“This is the first ancient human genome found in Africa to have been sequenced,” said Marcos Gallego Llorente, a geneticist at the University of Cambridge and member of the international team of researchers whose findings were published Thursday in the journal Science.

Previously, scientists had only been able to sequence DNA from samples found in northern and arctic regions, because the climate there allows genetic material to survive for longer. In 2011, archaeologists with the help of local people discovered a cave containing the bones of a man – dubbed Mota – who died around 2,500 BC and from whose temporal bone they managed to extract intact DNA.

By comparing this ancient DNA with modern samples, researchers were able to map genetic changes that have taken place in the past 4,500 years. They found that East African populations now have as much as a quarter Eurasian ancestry, while those in the far west and south of the continent still have at least 5 percent of their genome from Eurasian migrants.

“This paper is exciting because it is the first to get ancient DNA from Africa. I think the analyses are also interesting, in particular, the claim that all sub-Saharan Africans today have a substantial amount of ancestry from back-to-Africa migrations,” said David Reich, a geneticist at the Harvard Medical School who wasn’t involved in the study. “This is a fairly surprising claim, but the analyses seem thorough.”

The researchers traced this injection of genes to an event known as the ‘Eurasian backflow.’ It describes a period some 3,000 years ago when people from the Near East and Anatolia streamed into the Horn of Africa, a reverse migration to that which led the first humans out of Africa about 100,000 years ago.

“It is possible that there were even more ancient migrations back to Africa,” said Llorente, “but what we can say for sure is that there was a very big migration after the time Mota lived.”

It was so big, in fact, that the number of migrants flooding into the Horn of Africa may have amounted to over a quarter of the population of the region at the time.

It’s not clear why they moved, though one theory that’s been suggested is that farmers looking for fertile land traveled up the Nile. Wheat and barley, which first emerged in the Near East, appeared as crops in East Africa around 3,000 years ago.

Paul Heggarty, a linguist at the Max Planck Institute for Evolutionary Anthropology in Leipzig, Germany, who also wasn’t involved in the study, said the Eurasian backflow theory ties in with research about the spread of Semitic languages from the Near East to Ethiopia.

By analyzing the kinds of genes the Stone Age farmers carried to Africa, the scientists also found they were closely related to the same population that had brought agriculture to Europe about 7,000 years ago. Today, those ancient farmers’ closest genetic relatives are found on the island of Sardinia.

This means that modern-day migrants from East Africa crossing the Mediterranean to Europe may encounter distant cousins whose ancestors took a different path than theirs thousands of years ago.