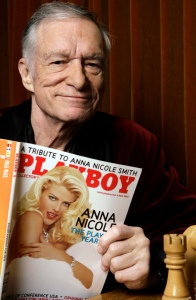 FILE – In this April 5, 2007 file photo, Playboy Enterprises founder Hugh Hefner poses with a copy of Playboy magazine featuring Anna Nicole Smith as Playmate of the Year, at the Playboy Mansion in Los Angeles. The magazine that helped usher in the sexual revolution in the 1950s and ’60s by bringing nudity into America’s living rooms announced this week that it will no longer run photos of completely naked women. Starting in March, 2016, Playboy’s print edition will still feature women in provocative poses, but they will no longer be fully nude. (AP Photo/Damian Dovarganes, File)

LOS ANGELES (AP) — For generations, teenage boys got their first look at a naked woman from Playboy, often from a copy swiped from Dad’s sock drawer or filched from a newsstand.

These days, however, you can see far more explicit stuff on your phone than anything Hugh Hefner probably imagined when he launched his pioneering skin magazine 62 years ago with a centerfold of Marilyn Monroe.

Which is why, Playboy announced this week, it will stop running nude photos.

“You’re now one click away from every sex act imaginable for free. And so it’s just passé at this juncture,” Playboy Enterprises CEO Scott Flanders told The New York Times, which first reported the change.

In a move Playboy said had the blessing of the 89-year-old Hefner, the magazine will continue to publish what it called “sexy, seductive pictorials of the world’s most beautiful women,” but they won’t be baring it all.

It’s the end of an era, many said Tuesday, among them author Gay Talese, who wrote about Playboy and Hefner in his 1981 book about the sexual revolution, “Thy Neighbor’s Wife.”

During the magazine’s heyday, subscribers could plausibly, if not always convincingly, claim they read it for the articles. It published the work of such writers as John Updike, Jack Kerouac, Ray Bradbury and Joseph Heller and interviewed the likes of Jimmy Carter, Fidel Castro, Malcolm X, Muhammad Ali, Miles Davis, Frank Sinatra and Bob Dylan.

It also ran nude photos of celebrities such as Drew Barrymore and Daryl Hannah and made stars of Playmates of the Month like Anna Nicole Smith.

The magazine that helped foment the sexual revolution in the 1950’s and ’60s has seen its circulation plunge in recent decades, however, because of some of the very forces it set in motion.

Playboy already took a similar step online more than a year ago. It banned full nudity on its website in August 2014 in a move that made the site safer for people to visit at work.

The company said the site saw the number of monthly unique visitors soar 400 percent. At the same time, it said, the median age of visitors fell from 47 to 30, a far more desirable demographic for advertisers.

One of the magazine’s veteran contributors, celebrity interviewer David Rensin, praised the end of full nudity as something Playboy should have done years ago.

“It’s a good business move. The magazine’s got to keep up with the times,” said Rensin, whose interview subjects have included Bill Gates, Jerry Seinfeld and Martin Scorsese. More recently he interviewed Scarlett Johansson and also Lena Dunham, whom people can see nude simply by watching her TV show “Girls.”

But for every newsmaker or celebrity who said yes to a Playboy interview, Rensin told the AP on Tuesday, there were others who said no because they didn’t want their words to appear close to photographs of naked women.

One of those naked women, actress Kristy Swanson, also praised the change, though she added she will always fondly remember posing nude for her November 2002 pictorial. “I just think that change can be a good thing,” she said.

Others questioned whether the change comes too late to make much difference for the magazine, which has seen circulation fall from 5.6 million in 1975 to about 800,000 today, according to the Times, which cited the Alliance for Audited Media.

“The perception of what Playboy is is never going to change,” said Samir Husni, director of the Magazine Innovation Center at the University of Mississippi’s Meek School of Journalism in Oxford.