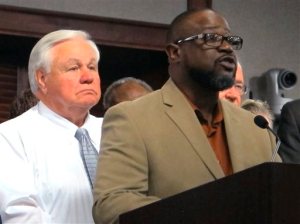 Anthony Scott, the brother of Walter Scott, the unarmed black motorist who was shot and killed by a North Charleston, S.C., police officer earlier this year, speaks Thursday, Oct. 8, 2015, in North Charleston after the city council approved a $6.5 million settlement with the Scott family. North Charleston Mayor Keith Summey is at left. (AP Photo/Bruce Smith)

NORTH CHARLESTON, S.C. (AP) — North Charleston, South Carolina, did not erupt in violence — as other cities in similar circumstances did — after a white police officer fatally shot an unarmed black man.

Attorneys for both the city and the family say that is because of the quick actions both sides took to preserve the peace and to come to an agreement.

The results of those efforts: The North Charleston City Council unanimously approved a $6.5 million settlement Thursday with the family of Walter Scott. Scott, 50, was shot April 4 by North Charleston police officer Michael Slager.

A bystander captured the shooting in a dramatic cellphone video that showed Slager firing eight times as Scott ran. The shooting inflamed the national debate about how blacks are treated by law officers.

Immediately after the video became public, Scott’s family called for calm. And within days, North Charleston Mayor Keith Summey contacted the family about reaching a settlement. Attorneys worked on the settlement for months before the measure was brought before the city council, which voted 10-0 in favor of it Thursday.

“None of us did anything to escalate this into an uncontrolled environment,” he said. “It is a different template from what you have seen around the country.”

Chris Stewart, an attorney for the Scott family, agreed with Hair that the actions taken by both sides have been “almost a blueprint of how these situations should be handled.”

“Governments are listening now and they are not tolerating this type of behavior,” Stewart said.

Mayor Keith Summey said he was pleased with the settlement.

“The family took steps to keep the community calm, and for that the city is thankful,” he said. “This is a very difficult period for the Scott family. I know they are glad to have this part behind them so their healing process can continue.”

The mayor said that since the shooting, North Charleston police have been outfitted with body cameras. Slager was not wearing one. Summey also noted the police department will be working with a division of the Department of Justice that helps local communities resolve issues involving race, color, national origin or gender.

Slager was indicted on a murder charge in June and a judge has since refused to set bond, saying his release would “constitute an unreasonable danger to the community. The officer also was fired after his arrest on the murder charges and has been detained in solitary confinement.

Hair said that within days of the shooting, Summey met with the Scott family and their attorneys. Hair said both sides felt that it was in everyone’s best interest to reach a resolution and avoid a lawsuit.

“We knew we had a police officer charged with murder. We have a video tape that quite frankly might be the most played video tape in the history of modern media,” he said. “It was played all day, every day around the world, so from our perspective the city had great exposure. The city also wanted to do the right thing by the family and for its citizens.”

Stewart said a number of issues had to be considered in reaching the $6.5 million figure. Noting that North Charleston is no New York, he remarked, “There is no way this city could pay $50 million.” He said attorneys also had to consider the damage that a drawn-out legal battle might do to the city and its residents.

Hair said the $6.5 million represents the largest settlement for such a case in the state’s history.

Before the video was brought to the attention of authorities, Slager had told investigators that Scott tried to grab his gun and Taser. But prosecutor Scarlett Wilson said Scott was running away and the only time Slager could be seen running was to go back, pick up the Taser and then drop it by Scott’s body.

“We have seen that incidents like this have happened across the country and we’ve seen how those situations have been handled,” said Justin Bamberg, a state representative and an attorney who represents the Scott family. “I truly believe … we have set a prototype, a standard for how these types of situations can be handled.”

He said such cases need to be resolved by reaching common ground.

“When you keep faith and respect one another and you don’t go to your corner based on whether you are black or white or rich or poor, things can work out,” he said.