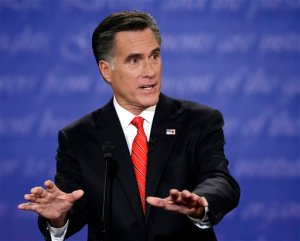 FILE – In this Oct. 3, 2012, file photo, then-Republican presidential candidate Mitt Romney speaks during the first presidential debate with President Barack Obama at the University of Denver, in Denver. Republican presidential candidates seem to be drawing this lesson from Mitt Romneys failed 2012 campaign, dont promise to balance the budget while cutting taxes. Romneys vow led Democrats to accuse him of planning to effectively raise middle class taxes while dramatically cutting those for the wealthy. (AP Photo/Eric Gay, File)

DENVER (AP) — Republicans came into this presidential campaign with painful memories of how, in the last one, Democrats blasted Mitt Romney’s tax plan as a giveaway to the rich. They’ve heard a new wing of conservative intellectuals urge them to focus on tax cuts to working-class Americans rather than the wealthy.

Yet the release of Donald Trump’s tax plan adds to the number of major GOP presidential candidates who propose to cut all taxes — but especially those for the wealthy — as deeply, or deeper, than Romney proposed. The lesson Republicans seem to have drawn is to simply stop worrying about balancing the budget. The plans would blow open deficits over the next decade that economists estimate ranging from $3.6 trillion to $12 trillion.

Oren Cass, who was Romney’s domestic policy adviser, noted the former Massachusetts governor had pledged to make his tax cuts deficit-neutral by cutting tax loopholes, though he never fully detailed how his plan would do so. Yet he was still savaged by Democrats who accused him of planning to stiff middle-class ratepayers for the benefit of the rich.

“You look at what Gov. Romney did and you say, ‘There’s nothing to be gained from being responsible that way,’

” Cass said. “You may as well do the plan that your base is going to love.”

Trump initially hinted he might buck conservative economic orthodoxy and raise taxes on the wealthy. But he ended up releasing the most aggressive tax cut of all candidates to date. The Tax Foundation, which favors lower taxes, estimated that his plan would increase the deficit by $12 trillion. The foundation found more than one-fifth of the plan’s benefit would accrue to the top 1 percent of income earners.

Trump’s plan, released during a hypercompetitive Republican primary season, pointed to the power of traditional conservative thinking — that lower taxes are the best way to spark growth, and any skew toward the wealthy is mainly a reflection of the outsized amount of taxes the rich already pay.

“Even for Trump, it’s hard to be different,” said Martin Sullivan, chief economist for the nonpartisan research group Tax Analysts. “The new flavor is a lot of tax benefits at the low end and then much more on the high end.”

Still, Rubio would eliminate taxes on investment gains, which is how most of the affluent make most of their money, and Bush would lower top rates dramatically as well. Both of their plans are skewed to the wealthy, like Trump’s, but less so.

Criticism of tax proposals that benefit the wealthy grates on conservative economists. They note that the top 1 percent already pays more than a third of federal income taxes, so any large reduction would inevitably benefit them anyhow.

They also argue that, by goosing the economy, the benefits from well-designed tax cuts would spread out more equitably through the economy.

Still, Democrats are poised to exploit the issue.

“Each one of these candidates has a tax plan that would rip a multi-trillion-dollar hole in the federal deficit, which would likely have to be offset by cuts to programs important to the middle class, including Social Security, Medicare, infrastructure, and education,” said Eric Walker, a spokesman for the Democratic National Committee. “We need a tax system that rewards work instead of just wealth.”

That sort of sound bite gnawed at Romney in 2012.

This time, the Republican tactic is to shrug off the slam on the deficit, said Kyle Pomerleau, an economist at the Tax Foundation.

The Tax Foundation estimated that Rubio’s plan would cost more than $4 trillion over a decade, though when the growth it could spark is counted it would eventually pay for itself. Likewise, the foundation, whose estimates are often challenged by more centrist or liberal groups, priced Bush’s cut at $3.6 trillion, or $1.6 trillion when growth is factored in. The cost of Trump’s proposal is lowered only to $10 trillion with the growth estimate.

Bush has promised to rein in spending to close the deficit, as has Trump, but they have provided no details yet for their plans.

Howard Gleckman of the nonpartisan Tax Policy Center said the buffet-style GOP tax plans will contrast sharply with Hillary Clinton’s more limited proposals that target the middle class during the general election. Clinton, if she becomes the Democratic nominee, will inevitably attack Republican proposals as giveaways that will come at the expense of education and entitlements like Medicare.

But the 2016 tax test is shaping up to be a bit different this time, Gleckman said. “If you give middle income taxpayers a big tax cut, do they even care if the rich get a bigger tax cut?” he asked.