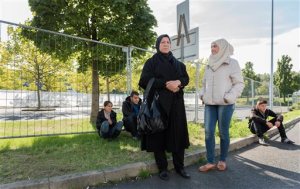 HEIDENAU, Germany (AP) — From the bright lights of Berlin to a grim former Nazi military barracks near the Czech border, the Syrian refugee family’s new life in Germany has been a roller-coaster of euphoria and despair.

Last week, fate reserved yet another nasty surprise for the Habashieh family, as they were shuttled from a miserable army barracks to an even more dismal refugee center — in a town that made international headlines last month because of neo-Nazi riots against plans to house migrants there.

The Habashiehs arrived well after the protests, but residents have been quick to tell them how unlucky they are: Heidenau is one of Germany’s most depressed, racism-infested towns. In late August, more than a hundred drunken rioters threw stones inside the shelter and blocked the road so buses packed with asylum-seekers could not enter the compound. More than 20 police officers were injured by firecrackers and broken bottles thrown by neo-Nazis.

“I keep telling my mom that soon we will be done here and start our lives again,” said 19-year-old Reem Habashieh. “But really, it’s unbearable here.”

EDITOR’S NOTE: This is the third in an occasional series focusing on how new arrivals are adjusting to life in Europe — and how Europe is adjusting to them. Some of the stories will focus on the path of the Habashieh family.

Reem, her mother Khawla Kareem, brothers Mohammed, 17, and Yaman, 15, and younger sister Raghad, 11, are desperately trying to make the best of a bad situation. But it’s hard to keep up a brave face when authorities keep shuttling you from place to place because of the “no vacancy” message at processing centers.

Things were bad enough two weeks ago when the family received computer-generated instructions to board a train from Berlin and head to the gritty eastern town of Chemnitz.

There they found their prospective new home to be a forbidding compound surrounded by towering fences topped with barbed wire. It was not the kind of life they dreamt of day and night on their perilous 16-day journey from war-torn Damascus; over the Mediterranean on a rubber dinghy; across the Balkans; and finally into Germany.

But the heartbreak didn’t end there. Guards told them the asylum center was full, and ordered them to wait through the night for the bus that would eventually take them to Heidenau.

Life here seems hardest for mother Khawla Kareem, who constantly agonizes over whether she made the right decision to bring her children out of Syria.

Before the outbreak of Syria’s civil war, Khawla Kareem would start her mornings in Damascus listening to the yearning tunes of Lebanese star Fairuz, brew herself a strong black coffee and wake up her four children for school. These days, she wakes up freezing cold on a narrow black army cot, among 700 other refugees crammed into a defunct home improvement store — suffering from a piercing headache without a cup of coffee in sight to help her begin another day of bone-numbing idleness.

Germans have been overwhelmingly welcoming to the flood of newcomers, who are expected to reach up to 1 million this year. But there have been anti-foreigner attacks and demonstrations by the far right — and Heidenau became Germany’s main focal point for that hatred. So much so that Chancellor Angela Merkel visited its shelter late last month, to publicly show support for the refugees.

The Habashiehs’ new temporary home sits between train tracks, a furniture factory and a busy main road leading to the Czech border. The compound is closed off by metal fencing covered with a white tarp, and guarded around the clock by security guards.

On Tuesday morning, about 80 men lined up at a side door to pick up their weekly pocket money of about 30 euros, provided by the German government. A pregnant woman collapsed nearby and was whisked away in an ambulance, as a dozen kids sat around a table under a sycamore tree blowing soap bubbles.

Mohammed puffed at a cigarette and stared into the void, while his younger brother Yaman killed time playing games on his phone.

Little Raghad was more cheerful. She had already participated in a German class held by volunteers the day before. Then an elderly German couple dropped by in their car to deliver crates full of hand-picked apples — and gave her a small purse with shiny black tassels.

Reem spends most of her time outside the building in the parking lot, reading books she downloaded on her smartphone. She’s currently devouring “The Bamboo Stalk” by the Kuwaiti author Saud Alsanousi, about the life and challenges of foreign migrant workers in the Arab world.

Mother Khawla Kareem, 44, looked more tense and downtrodden than her children. Lack of sleep showed in black circles under her eyes. She pressed her lips tightly together, trying not to cry again at the thought of Eid Al-Adha, the big Islamic feast beginning this week.

Even during the war in Syria, and after her husband’s death, she had still managed to conjure the holiday’s magic at home — buying her youngest daughter new dresses and taking her out for fun rides and sugary treats.

In Heidenau, there’s no way the family will be able to do anything special on the holiday, and the family was gloomy about having to spend it in a converted two-story store.

“It’s an unhealthy situation, it’s a closed place, no windows, it’s not good for a human being to be in there,” said Reem. “The shared bathrooms are very gross, very disgusting.”

To grant people a minimum of privacy, white sheets have been hung in the vast hall, a futile attempt to separate families and groups of young men sleeping on cots.

On an escalator that no longer moves, people walk up to the second floor, where food is handed out during meal times. The building is lit with fluorescent long bulbs that are turned off from 10 at night to 7 in the morning.

Christopher Neidhardt, the head of the refugee center, said he was given less than two days’ notice by the Saxony state government to turn the store into refugee accommodation. Such chaotic situations are mirrored across Germany, as authorities struggle to cope with the massive influx of Syrians. Towns have appropriated gyms, office space and empty schools, and built up huge tent cities, to cope.

Neidhardt, who maintains a friendly calm amid the turmoil, pointed out that Heidenau was only an “initial temporary housing center” where people in transit are put up before they start their real asylum process.

For the Habashiehs, that means being bused three times to the central refugee agency in Chemnitz for medical checkups and interviews that will allow them to launch their bid in earnest. Once that happens, they can be relocated to a smaller, more welcoming asylum center, where the kids can finally return to school.

But nobody can tell them how long they will be stuck in Heidenau, whether it’s weeks or months. And the uncertainty weighs heavily.

“Every morning we’re checking the black board to see if our names are finally being called for the medical checkup,” said Reem. “But so far we haven’t been lucky.”