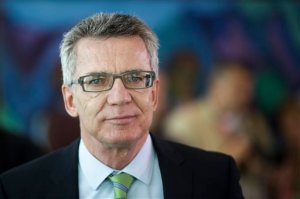 FILE – In a Wednesday, Sept. 2, 2015 file photo, German Interior Minister Thomas de Maiziere arrives for the weekly cabinet meeting of German government at the chancellery in Berlin. De Maiziere said Sunday, Sept. 13, 2015, that Germany is introducing temporary border checks on the Austrian frontier in a bid to limit the influx of refugees. The move, de Maiziere said, was also a signal to Europe: Germany is facing up to its humanitarian responsibility, but the burdens connected with the large number of refugees must be distributed in solidarity within Europe. (AP Photo/Markus Schreiber, File)

BERLIN (AP) — Germany introduced temporary border controls Sunday to stem the tide of thousands of refugees streaming across its frontier, sending a clear message to its European partners that it needs more help with an influx that is straining its ability to cope.

Germany is a preferred destination for many people fleeing Syria’s civil war and other troubled nations in the migration crisis that has bitterly divided Europe. They have braved dangerous sea crossings in flimsy boats — another 34 drowned Sunday off Greece — and made long treks across unwelcoming countries in hopes of a better life.

More than a week ago, Germany and Austria agreed to let in migrants who had massed in Hungary, saying it was a one-time measure to ease an emergency. The flow has continued undiminished, and while Germans have remained welcoming, officials said the numbers were straining the country’s ability to provide accommodations.

Berlin has become increasingly frustrated with the reluctance of many other countries in the 28-nation European Union — especially those in the former Eastern bloc — to share the burden of hosting the newcomers. Sunday’s action, focusing on the Austrian border, came a day before a meeting of EU interior ministers to discuss the crisis.

“The aim of this measure is to limit the current influx to Germany and to return to orderly entry procedures,” Interior Minister Thomas de Maiziere told reporters. “This is also urgently necessary for security reasons.”

De Maiziere added: “The great readiness to help that Germany has shown in recent weeks … must not be overstretched.”

He did not specify how long the border controls would remain in place or how exactly incoming migrants would be handled, saying only that Germany will continue to observe national and European rules on protecting refugees.

German officials didn’t have further details, but in principle, border checks allow officials to turn back anyone lacking valid papers to enter.

The move, de Maiziere said, was also “a signal to Europe: Germany is facing up to its humanitarian responsibility, but the burdens connected with the large number of refugees must be distributed in solidarity within Europe.”

Germany’s national railway, Deutsche Bahn, said it had suspended service from Austria to Germany for 12 hours at the orders of authorities. Most new arrivals have come by train.

De Maiziere noted that Germany isn’t technically responsible for most of the new arrivals, pointing to EU rules under which they are supposed to be registered and processed in the first EU country where they arrived. He urged other countries to apply those rules, and said people seeking protection cannot choose the country where they receive it.

He said Germany was reintroducing checks at its borders with an “emphasis” on the Austrian frontier. It wasn’t clear whether there would be any change at other borders.

Czech Prime Minister Bohuslav Sobotka said Sunday his country has boosted the police presence on the Austrian-Czech border in reaction to the German decision. The government will assess the situation on a regular basis and will take further security measures if needed.

Passport-free travel in much of the continent under the so-called Schengen agreement is considered one of the EU’s signal achievements. The agreement allows countries to reintroduce controls in exceptional circumstances, as Germany did for the Group of Seven summit in June. The European Commission said the crisis “appears to be a situation covered by the rules.”

Hungarian police say more than 186,000 people have passed through Hungary from Serbia this year en route to Austria and Germany. The main point of arrival in Germany has been Munich, where officials say 63,000 people have come since the end of August, including over 12,000 on Saturday.

Many first come ashore in the EU on Greece’s eastern islands after risky boat journeys. Scores have drowned making the crossing from Turkey.

Greece’s coast guard said the 34 who died Sunday, including four infants and 11 older children, drowned when their wooden boat containing more than 130 people capsized near the island of Farmakonissi. Officials said the boat may have tipped over in part because of wind gusts exceeding 50 kph (30 mph). The crossing is often made more dangerous by smugglers who require asylum seekers to pilot the overloaded craft themselves in choppy seas.

Officials said 68 others were rescued while 30 more swam to the barely populated island. The survivors and the body of one child were taken to the nearby island of Leros. The other dead were being taken to Rhodes, which has autopsy facilities.

On Saturday, two other boats carrying asylum seekers capsized in the Aegean and at least five people — four children and a 20-year-old man — were presumed drowned.

Such risks have not deterred people from trying to reach Greece’s eastern islands, where they pursue a more than 1,000-mile (1,600-kilometer) odyssey to the heart of Europe via the Balkans and Hungary.

But Hungarian authorities have vowed to fortify their southern frontier and — starting Tuesday — prosecute those who try to evade border police. Hungarian army engineers spent Sunday expanding the country’s planned 174-kilometer (109-mile) border fence with Serbia and crowning it with coils of razor wire.

Police said 4,330 were detected crossing on foot in the previous 24 hours, more than 700 higher than the previous one-day record, as trekkers tried to reach Hungary before the tougher security measures take effect.