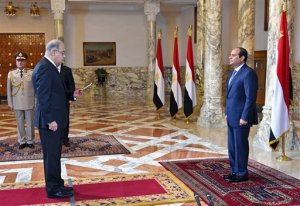 In this photo provided by Egypt’s state news agency MENA, Egyptian President Abdel-Fattah el-Sissi, right, presides over the swearing in of Prime Minister Sheriff Ismail one week after the previous Cabinet resigned amid a corruption probe, in Cairo, Egypt, Saturday, Sept. 12, 2015. El-Sissi has also restructured the Cabinet, merging several ministries and forming a new body responsible for immigration, according to the Middle East News Agency. The 33-member Cabinet contains three women and 16 new members. (MENA via AP)

Local media accused Mehleb and his ministers of incompetence and being out of touch with the public.

The accusations stood in contrast to coverage of El-Sissi, the former general and defense minister who led the overthrow of Islamist President Mohamed Morsi in 2013. He has cultivated an image as a leader who is above the political fray and is routinely praised by Egyptian media.

Egypt, whose governments have long been plagued by corruption allegations, has been in turmoil since the 2011 uprising that toppled longtime autocrat Hosni Mubarak.

Following the ceremony, el-Sissi told the new government to “double the pace of work and finish national projects on time.” El-Sissi is overseeing a series of ambitious projects to revive Egypt’s battered economy, including developing roads, building a million housing units and the recent expansion of the Suez Canal.

El-Sissi also restructured the Cabinet, merging several ministries and forming a new body responsible for immigration, according to the Middle East News Agency.

Prime Minister Ismail was among the most celebrated ministers in the former Cabinet, especially after Italy’s Eni SpA revealed late last month their discovery of the “largest-ever” oil field in the Mediterranean Sea off the coast of Egypt.

Bound by the constitution, Egypt’s new government must submit its resignation once the new parliament convenes in December, following upcoming parliamentary elections. According to local media reports, the inherently short-term nature of the current Cabinet prompted some ministerial candidates to decline offers to join.

Egypt has been without a legislature for three years. In its absence, el-Sissi holds legislative authority and has passed dozens of laws by decree.

Barakat led the prosecution of members of the Brotherhood and other Islamists, including Morsi.

Since Morsi’s fall, Egypt has been battling an Islamic insurgency. Once limited to the restive northern Sinai Peninsula, where the leading militant group has pledged allegiance to the Islamic State group, attacks have struck the mainland in recent months.

As for Mehleb, el-Sissi appointed him to the position of “assistant to the president for national and strategic projects.” Shortly after he accepted Mehleb’s resignation last week, el-Sissi said in a speech that he still “needs Mehleb by (his) side.”

Some observers have interpreted these moves as an attempt by el-Sissi to engineer a soft landing for Mehleb, a former construction magnate and prominent member of Mubarak’s now-defunct National Democratic Party.

“(El-Sissi) is protecting Mehleb from the allegations and the talks that may follow him,” pro-government television presenter Tamer Amin said, praising the president for his deft handling of the situation.