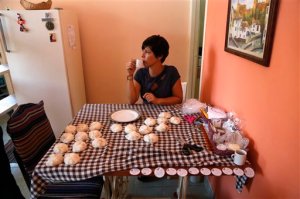 In this Aug. 26, 2015 photo, Sandra Aldama takes a break while wrapping bars of home made soap in Havana, Cuba. The church is operating in ways unimaginable in the years when the state tried to control every aspect of life in Cuba, such as the entrepreneurial training programs that imparted skills from accounting to business development that helped the Aldama family business. (AP Photo/Desmond Boylan)

HAVANA (AP) — As vespers drew to a close at the St. Egidio Catholic community center, a dozen homeless men in threadbare pants and rumpled T-shirts shuffled into a side room where volunteers handed out cups of soda and soft yellow rolls spread with mayonnaise.

“This is like my home,” said Ernesto Gutierrez, a 66-year-old retired policeman who sleeps in parks and other public places because he has no relatives overseas helping to supplement his meager pension. Often the sandwich he gets at St. Egidio is his only meal of the day: “I appreciate it so much.”

When Pope Francis arrives in Havana on Sept. 19, he’ll find his church ministering to more Cubans than at any time since the 1959 revolution that brought Fidel Castro to power.

After decades of conflict with Cuba’s Communist-run government, the Roman Catholic Church has quietly established itself as practically the only independent institution with any widespread influence on the island. Expanding into areas once utterly dominated by the state, the church is providing tens of thousands of people with food, education, business training and even libraries stocked with foreign best-sellers.

“There has been a meeting of the minds for the benefit of the people,” said Rolando Garrido, a doctor and director of Saint Egidio, which is run by laypeople in a shabby part of Old Havana. “The state has realized that the church’s social programs are a force for good.”

Church and state waged open warfare in the early years after the revolution. Castro sent priests, including the current archbishop of Havana, Cardinal Jaime Ortega, to prison or work camps. Some clerics openly supported anti-revolutionary fighters.

That morphed into decades of official hostility to religion, which the government all but made illegal. Castro began easing prohibitions on faith in the 1990s, removing constitutionally enshrined atheism ahead of a visit by Pope John Paul II and reinstating Christmas as a public holiday soon after.

Enrique Lopez Oliva, a professor of history and religion at the University of Havana, said the church’s expansion into social welfare also has a longer-term goal of broadening its support among the Cuban people, with the hope of ultimately winning more leeway to operate. Ecclesiastical authorities have long wanted to run full-time private schools and get religious programming on state-run airwaves, both of which the government has stubbornly resisted.

Already, the church is operating in ways unimaginable in the years when the state tried to control every aspect of life in Cuba, particularly basic needs such as food, health and education. Now starved for cash, Cuba’s socialist bureaucracy no longer acts as the sole guarantor of its people’s welfare.

At Saint Egidio, neighborhood homeless can get a meal on a Friday night and wash and change their clothes the next day. Many receive clothes and emotional counseling. Volunteers take adolescents to retirement homes to cheer residents. There are also recreational programs like leatherworking and after-school sports, and academic tutoring.

“Slowly the state has been coming to grips with the reality that they can’t guarantee everything to everyone from the cradle to the grave,” said Gustavo Andujar, director of the Felix Varela Cultural Center, one of the main community outreach arms of the Archdiocese of Havana. “More and more spaces are opening up each day.”

Church officials say every parish in Cuba does at least modest community outreach, mostly involving education and assistance for the needy. In the central town of Remedios, volunteers give out free haircuts and food. In Santiago, one of the cities Francis will visit, thousands of people each year avail themselves of a church basement library offering computer access and printing services.

The programs are funded by a variety of donors including the Catholic charity Caritas and parishes in Spain, Italy, Germany and the United States, where many Cuban-Americans contribute. As Washington and Havana take further steps toward a detente begun with Francis’ help as mediator, U.S. links stand to grow even more.

The result is a lifeline for people like Bertha More, who shares a one-room apartment in Havana with her 85-year-old mother and her husband, a restaurant worker who was paralyzed by a stroke seven years ago and later lost a leg to circulation problems.

Unable to live on his $8 monthly state pension, the family relies on the nearby San Juan de Letran church for clothes, powdered milk, chicken, cooking oil even a few dollars cash each month to make ends meet. The priest also found More, 54, a part-time housekeeping job.

“The church’s help benefits me a lot,” she said. “They give me what they can.”

Nearby on a central Havana street that’s being patched and repainted ahead of the pope’s visit, some 500 students a year take foreign language, theater, dance, music, yoga and knitting classes in the Jesuit-run Loyola Center. It also distributes clothes and hygiene products, tutors schoolchildren and even offers values workshops on topics like honesty and conflict resolution.

“From what used to be cathechistic, liturgical work, we’re now developing something with more of a social purpose, starting with the most vulnerable segments of society,” said Father Juan Miguel Arregui, head of the Loyola Center.

Under economic reforms in recent years by President Raul Castro, hundreds of thousands of Cubans have launched small businesses or gone to work for them, and the church is increasingly playing a key role in supporting them.

The Varela and Loyola centers both have entrepreneurial training programs that impart skills from accounting to business development. Varela even offers a degree in humanities that’s not recognized by Cuban authorities but is internationally recognized, allowing its students to pursue degrees overseas.

Cintia Nunez, 28 years old and a lawyer by training, took a course at Varela and opened a private soap and candle shop with a friend in Old Havana.

After years of thinking about leaving Cuba due to lack of opportunity, she now wants to stay. The store is turning a profit, allowing Nunez and her partner to hire two saleswomen and two extra soap-makers, and they’re expanding the product line to include their own brand of lipbalm and facial cleansing mask.

“I always saw myself with my own business, something new, but I didn’t have the tools,” she said. “People leave the classes with a clearer idea of what they want to do, what they can do, and how.”