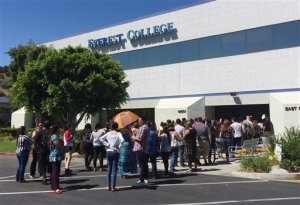 FILE – In this April 28, 2015 file photo, students wait outside Everest College in Industry, Calif., hoping to get their transcriptions and information on loan forgiveness and transferring credits to other schools. Almost 12,000 students are asking the federal government to discharge their college loan debt, asserting that their school either closed or lied to them about job prospects, according to government data released Thursday. The figure represents an unprecedented spike in what’s called a “borrower’s defense” claim following the collapse of Corinthian Colleges, a for-profit college chain that had become a symbol of fraud in the world of higher education. Under higher education law, students who believe they were victims of fraud can apply to have their loans discharged. (AP Photo/Christine Armario)

WASHINGTON (AP) — More than 3,000 former Corinthian College students will have their college loans erased, the first wave of debt relief tied to the collapse of the for-profit higher education chain. The potential cost to taxpayers if all Corinthian students seek relief: $3.2 billion.

So far, almost 12,000 students have asked the federal government to discharge their college loan debt, asserting that their school either closed or lied to them about job prospects, according to a report released Thursday by the Education Department.

About 3,100 closed-school claims have so far been approved — totaling about $40 million in student loans, the department said.

While unprecedented, the figures represent just a fraction of the students who might qualify for debt relief.

Education Undersecretary Ted Mitchell told reporters in a press call that processing remaining claims will take some time. “Borrowers and taxpayers are counting on us to get this right,” he said.

For 33-year-old Tasha Rincon, a mother of three, relief from her government loans for Corinthian cannot come soon enough.

Deeply in debt, Rincon says she can’t even afford to buy groceries and is working three hours a day in a school cafeteria about an hour away from her home in Lake Elsinore, California.

“It’s just not fair,” said Rincon, who graduated in 2012 from Corinthian’s Everest College with an associate’s degree in criminal justice and a bachelor’s degree in business management. She’s earning nowhere close to the $45,000 that recruiters had promised her.

“If it had helped me get a better job, I could do more for my kids,” Rincon said in an interview. She owes more than $43,000 in student loans and is waiting to hear from the Education Department whether her loans will be erased.

As of late last month, most of the nearly 12,000 claims that have been filed are Corinthian-related, and they represent an unprecedented spike in what’s called a “borrower’s defense” claim. With such a claim, students can ask for loan forgiveness if they believe they were victims of fraud.

Mitchell said the borrowers’ defense claims are “new territory” for the department.

Before Corinthian, officials say they knew of five or so “borrower’s defense” cases in the past 20 years. Following Corinthian’s demise, some 4,140 such claims have been filed since the department’s June announcement that it would make the debt-relief process easier. An additional 7,815 Corinthian students have filed claims for debt-relief because their school closed, officials said.

Mitchell and the department’s new “special master” for debt relief, Joseph Smith, did not have a dollar estimate for the nearly 12,000 claims made to date.

Mitchell said the potential costs to taxpayers could be up to $3.2 billion if all Corinthian students dating back to 2010 who borrowed government money were to seek relief. Some 350,000 students have attended Corinthian schools over the past five years.

Education Department rules say the company should be responsible for any canceled debt but it is unlikely that the company can pay. Corinthian filed for bankruptcy protection in May 2015.

Corinthian had been one of the largest for-profit schools when it collapsed and became a symbol of fraud in the student loan program. According to investigators, Corinthian schools charged exorbitant fees, lied about job prospects for its graduates and, in some cases, encouraged students to lie about their circumstances to get more federal aid. The bankruptcy court filing came after the department notified Corinthian that it would fine its Heald College $30 million for misleading students. Some 13,500 students still were enrolled.

The Obama administration is trying to rein in the for-profit college industry, which it says relies too heavily on federal student loans and often misleads students on job prospects. In its latest move, the Education Department on Aug. 28 sent a letter to DeVry University asking the for-profit institution for proof to support its job placement claims.

In a plan orchestrated by the federal government, some of the Corinthian schools closed while others were sold. The biggest question has been what should happen to the debt incurred by students whose schools were sold. The law already provides for debt relief for students of schools that close, so long as they apply within 120 days.

The latest plan expands debt relief to students who attended a now-closed school as far back as a year ago. And it streamlines the process for students whose schools were sold, but who believe they were victims of fraud.