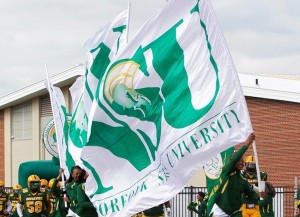 NORFOLK, Va. – Norfolk State’s 2015 football season-opener at Rutgers on Sept. 5 will kick off at noon and will be televised live on ESPNews, the Big Ten announced on Friday.

This year marks the fourth meeting all-time between NSU and Rutgers, with the Scarlet Knights winning previous meetings in 2007, 2010 and 2013. This year’s game at High Point Solutions Stadium in Piscataway, N.J., will also mark the debut of new Spartans’ head coach Latrell Scott.

Rutgers is the first of three non-conference road games for the Spartans this fall, all against Football Bowl Subdivision (FBS) teams. NSU also plays at Old Dominion of Conference USA on Sept. 12 and at Marshall (also of C-USA) on Sept. 19. Game times and possible TV opportunities for those two games have yet to be announced.

Game times for NSU’s MEAC football games – beginning with the home opener with Hampton on Sept. 26 – have all been announced, pending the release of the conference television schedule. To view the Spartans’ 2015 football schedule, click here.

Originally published on NSUSpartans.com and used with permission.