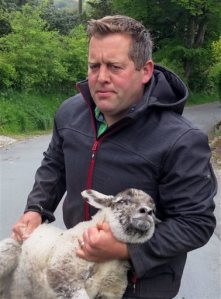 In this June 5, 2015, photo, shepherd James Rebanks carries a sheep in Matterdale, England. Rebanks is the worlds most famous shepherd, with a hit Twitter account, a best-selling book and TV crews rattling up the lane to his farm. Hes gratified by the attention, if a bit bemused. Readers around the world have flocked to Rebanks dispatches from a way of life that has _ against the odds _ survived industrialization, globalization and mass tourism. (AP Photo/Jill Lawless)

MATTERDALE, England (AP) — James Rebanks sits in his stone farmhouse, describing the hardscrabble mountain life his family has known for six centuries or more. Then his cell phone rings. It’s a big London ad agency, hoping to sign him up for a project.

Rebanks is probably the world’s most famous shepherd, with a hit Twitter account, a best-selling book and TV crews rattling up the lane to his farm. He’s gratified by the attention, if a bit bemused.

“Somebody from Hollywood rang up yesterday, wanting to make a movie out of my book,” the 40-year-old said. “Which is completely bonkers.”

Readers around the world have flocked to Rebanks’ dispatches from a way of life that has — against the odds — survived industrialization, globalization and mass tourism.

On Twitter, his descriptions of lambing and haymaking have attracted 65,000 followers. “The Shepherd’s Life,” his book recounting the rhythms of the rural year and the daily struggle to make ends meet, is a best-seller in Britain and Canada and is being translated into German and Swedish. The New York Times called it “captivating.”

Separately, British broadcaster ITV is making a reality show called “Flockstars” that will see celebrities compete in sheepdog trials. And “Rams,” a movie about Icelandic shepherds and their flocks, won a major prize at last month’s Cannes Film Festival.

Suddenly, sheep seem to be everywhere. But they have been the center of Rebanks’ life for as long as he can remember.

He belongs to one of the few hundred families who farm the valleys and mountains, or fells, of the Lake District in northwest England. It’s a rugged area that has produced stubborn people, as well as sturdy sheep whose homing instinct means they can graze, unfenced, on the unhospitable high fells.

A land of deep, narrow lakes, gray stone walls and green-brown mountains, the Lake District attracts millions of campers, climbers and hikers each year, and has inspired artists and poets since William Wordsworth 200 years ago. But Rebanks felt one important voice was missing.

“If you go into any of the bookshops here, you’ll see hundreds and hundreds of books about the Lake District,” said the burly, talkative farmer. “You’ll struggle to find three or four that tell the story of the people who live and work in the landscape.

“Until fairly recently, people were still talking about this landscape being ‘discovered’ or’ invented’ in the 18th century by Wordsworth and people like that,” he said. “Our way of life was fully formed before that person ever put pen to paper.”

Rebanks’ memoir describes that way of life, whose essence has changed little over the centuries. It is partly an account of a shepherd’s year, from the treacherous snowdrifts of winter to the burst of new life in spring.

It’s also a primal story of fathers and sons, poverty and struggle. Rebanks left school at 15 to work on the farm, but clashed with his father and with the brutal economics of farming. He earned a degree in history from Oxford University in his 20s, came home and struggled to keep the family farm going. The last few decades have been hard for small farmers. Most have second jobs; Rebanks works as an adviser on sustainable tourism to the U.N cultural organization, UNESCO.

“We’ve been going to disappear for 200-odd years,” he said. “That’s always been the story. Nearly all books about shepherds are ‘The Last Shepherd.’ There’s always ‘last’ in it because it adds a touch of romance.”

Rebanks is determined not to be the last of anything. He lives with wife Helen and three children aged between 3 and 9 in Matterdale, one of the Lake District’s many narrow valleys. The family owns 450 sheep, rising to 1,000 after lambing season.

One recent day, with a journalist in tow, he hopped on his quad bike and drove some of his flock down narrow lanes to low-lying fields, with the help of his skilled sheepdogs, Tan and Floss.

Rebanks loves sheep, especially the indomitable, white-faced Herdwicks, and he writes about them with irresistible enthusiasm. At one point in “The Shepherd’s Life,” he describes a male sheep, or tup, as looking like Russell Crowe in “Gladiator,” and the comparison seems entirely reasonable. When he sells one prized ram, he misses seeing him, “as if I once had a Van Gogh on my wall and now it is gone.”

Part of the appeal of “The Shepherd’s Life” for many readers is its focus on place and belonging, things many of us think we’ve lost in our hectic, uprooted lives.

Colin Dickerman, editorial director of Flatiron Books, the volume’s U.S. publisher, said memoirs “are often about trying to leave somewhere: kids from small towns who want to escape to the city, people who are sick of the city and want to move to the country.”

“This was about trying to stay in one place. To me that was really fascinating.”

Rebanks has been delighted by others’ interest in his life and work. His Twitter account, Herdwick Shepherd, has fans around the world. When he live-tweeted the birth of Floss’s puppies in March, he briefly became an Internet sensation.

He said the popularity reassures him “that people do care about the land, even if they’re a very long way from it.”

“I think there’s a sort of Harvard Business School way of looking at the world which is to say, because it’s old-fashioned, because it doesn’t make very much money, people should rationally choose to go off and be IT consultants or bankers in the City of London,” he said. “I think in my early 20s I bought into that. I thought, we’re on the wrong side of history. It’ll all disappear.

“Twenty-something years later I’m looking at it, and we haven’t gone anywhere.”