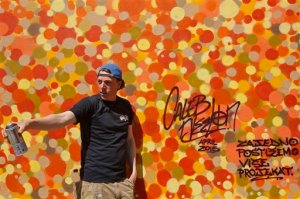 American graffiti artists Caleb Neelon poses for photo in front over work on a wall in Bosnian capital of Sarajevo, on Tuesday, April, 21.2015. American graffiti artists Caleb Neelon, the author of street murals in numerous cities around the world, has gathered youths from different sides of Bosnias ethnic divide to jointly work on a peace-promoting project.

Armed with cans of spraypaint, youngsters from Bosnia’s Croat, Serb and Bosniak ethnic groups joined forces with Neelon on Tuesday to begin

“If people see in what I do a message of peace, …an opportunity to do something that brings people together, that really touches my heart,” Neelon said.

Despite two decades of peace, relations among members of the country’s different groups are still dominated by suspicion and mistrust.

The idea of Neelon’s project was to encourage youths from all three groups to jointly produce peace-promoting street art.

The peace murals are to be painted over a two-week period in predominantly Bosniak capital of Sarajevo, its majority Serb suburbs, as well as in Croat-dominated southern city of Mostar.