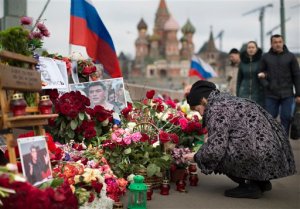 A woman lights votive candles at a place where Boris Nemtsov, a charismatic Russian opposition leader and sharp critic of President Vladimir Putin, was gunned down on Feb. 27, 2015 near the Kremlin in Moscow, Russia, Tuesday, April 7, 2015. Supporters of Russian opposition politician Boris Nemtsov gathered at a Moscow bridge where he was gunned down Feb. 27 to commemorate 40 days since his death, a special day in the Orthodox Christian tradition. (AP Photo/Alexander Zemlianichenko)

MOSCOW (AP) — Several hundred people brought flowers and candles Tuesday to a bridge just outside the Kremlin to commemorate the slain Russian opposition politician Boris Nemtsov, 40 days after the killing that shocked the country.

Nemtsov’s daughter, Zhanna Nemtsova, voiced doubt that the official probe would track down the mastermind.

“I’m not sure that this investigation will lead to the punishment, not only of those people who executed this crime, but those who organized or ordered this crime,” she told The Associated Press.

Nemtsov, a top opponent of Russian President Vladimir Putin, was shot dead late at night on Feb. 27 as he was walking just outside the Kremlin. Five Chechen men have been arrested on charges of involvement in the killing, but it has remained unclear who ordered the attack.

The bridge where Nemtsov was gunned down was packed Tuesday morning with his supporters. Passing cars were honking their horns at 11 a.m. local time (0800GMT), a designated moment of commemoration. Some drove by with pictures of Nemtsov in their windshield.

The 40th day since death is regarded as the final commemorative date in Orthodox Christian tradition.

Nemtsov’s slaying triggered one of the largest opposition protests in years, with people blaming Putin for fostering a climate of hatred in the country by casting his opponents as Western stooges.

Nemtsova told the AP that “our country is heading in the wrong direction.”

The politician’s close friend and ally, Ilya Yashin, argued Tuesday that Nemtsov’s killing was orchestrated in order to “instill fear into that dissenting segment of the society, that segment that does not support the president’s policies.”

Some Nemtsov supporters have remained skeptical about the official probe that pointed at the Chechens as the perpetrators, arguing that it could be an attempt to shift responsibility away from the government.

Others have said that the investigation highlighted soaring tensions between the leadership of Russian law-enforcement agencies and Chechnya’s regional leader, Ramzan Kadyrov. Kadyrov has relied on Putin’s support to rebuild Chechnya after two separatist wars and ruled the mostly Muslim region like a feudal lord, reportedly angering many in the Kremlin.

The key suspect, Zaur Dadaev, who was a senior officer in Kadyrov’s security forces, retracted his initial testimony, telling a court last week that he had been beaten and pressured to confess.

Yashin told the AP that investigators may have found the man who pulled the trigger but the mastermind is still on the loose.

“Those people directly responsible for organizing the murder are now in Chechnya under protection of Kadyrov and his militia,” Yashin said. “If the people who ordered the killing are not sent to prison, they will believe in their own impunity and their right to solve problems in any way they please.”

Iuliia Subbotovska contributed to this report.