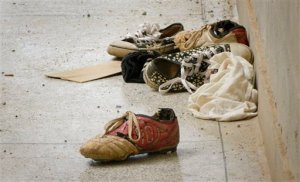 Abandoned shoes lie next to the Elgon A hostel inside the Garissa University College compound that was the scene of last week’s attack by al-Shabab gunmen, in Garissa, Kenya Monday, April 6, 2015. Kenya launched air strikes against al-Shabab Islamic militants in Somalia on Sunday afternoon and early Monday morning, following the extremist attack on a Kenyan college that killed 148 people, a military spokesman said. (AP Photo)

Some of the relatives of those who died gathered at a funeral home in Nairobi to view their loved ones. They prayed under an awning together and were led into the funeral home after an employee read out their names. Many emerged in tears.

Kenyan army troops on Monday walked through Garissa College University in the northeast town of Garissa where the bloodiest attack by al-Shabab on Kenyan soil occurred on Thursday. Shoes were scattered around and washed clothing still hung from a clothesline next to a dormitory.

One of the five arrested on suspicion of involvement in the Garissa attack is a Tanzanian who was found hiding under a bed in the school, according to a police officer. Contradicting an earlier government statement, the Tanzanian was not armed with grenades, according to the police officer who insisted on anonymity because he is not authorized to speak to the press.

“This is part of continuing operations, not just in response to Garissa,” he said.

Al-Shabab, which is based in Somalia, claimed responsibility for the college attack Thursday in Garissa, saying it was in reprisal for Kenya having sent troops into Somalia in 2011 to attack al-Shabab after gunmen carried out cross-border raids and kidnappings. Now those attacks in Kenya have increased, with civilians often being targeted.

Kenya’s troops in Somalia are part of an African Union force and are also shoring up the beleaguered Somali government. Kenya has carried out airstrikes before.

Four al-Shabab attackers were killed on Thursday to end the siege and their bullet-ridden bodies were later displayed in Garissa.

One of five people arrested on suspicion of involvement in the Garissa attack is a Tanzanian who was found hiding under a bed in the school, according to a police officer. Contradicting an earlier government statement, the Tanzanian was not armed with grenades, according to the police officer who insisted on anonymity because he is not authorized to speak to the press.

One of the attackers who was killed was a Kenyan, a law school graduate and a son of a government official in Mandera County, which borders Somalia.

A leading member of parliament, Aden Duale, said work must be done to prevent Kenyan youths from becoming followers of extremism.

“Some of our youth have fallen victim to this evil ideology of al-Shabab,” he said. “We will embark on an immediate, massive and sustained campaign to win back the hearts and the minds of our youth within our constituencies and the countries as whole. We recognize that some of our religious institutions have had some role in radicalization and propagation of this ideology.”

He also called for the closure of the Dadaab Refugee Camp, which houses nearly 500,000 who have fled Somalia.

The camp is the center for the “the training, the coordination, the assembling of terror networks,” claimed Duale, the majority leader in parliament. “These refugees, we want them relocated across the border . They have been with us for 20 years. I think time has come when the national security of our people becomes first.”