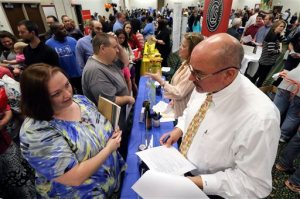 Frances Scoggins, left, speaks to Michael McCall, general manager for Chattanooga Labeling Systems, about her resume during a huge 15-county North Georgia job fair at The Colonnade in Ringgold, Ga., on Thursday, April 2, 2015. Scoggins has been unemployed for the past 4-months and is looking for a safety or manufacturing job. The U.S. government issues the March jobs report on Friday, April 3, 2015. (AP Photo/Chattanooga Times Free Press, Dan Henry)

WASHINGTON (AP) — The weakening U.S. economy spilled into the job market in March as employers added only 126,000 jobs — the fewest since December 2013 — snapping a streak of 12 straight months of gains above 200,000.

The Labor Department said Friday that the unemployment rate remained at 5.5 percent.

Friday’s jobs report raised uncertainties about the world’s largest economy, which for months has been the envy of other industrialized nations for its steadily robust hiring and solid growth.

U.S. employers appear wary about the economy, especially as a strong dollar has slowed U.S. exports, home sales have stagnated and cheaper gasoline has yet to unleash more consumer spending.

Some of the weakness may prove temporary: An unseasonably cold March followed a brutal winter that slowed key sectors of the economy.

Last month’s subpar job growth could make the Federal Reserve less likely to start raising interest rates from record lows in June, as some have been anticipating. The Fed may decide that the economy still needs the benefit of low borrowing costs to generate healthy growth.

Reflecting that sentiment, government bond yields fell Friday after the news of disappointing job growth. The yield on the U.S. 10-year Treasury note fell to 1.84 percent from 1.90 percent before the announcement. U.S. stock markets are closed in observance of Good Friday.

In addition to reporting sluggish hiring for March, the government revised down its estimate of job gains in February and January by a combined 69,000.

Wage growth in March remained modest. Average hourly wages rose 7 cents to $24.86 an hour. That marked a year-over-year pay increase of just 2.1 percent. But because average hours worked fell in March for the first time in 15 months, Americans actually earned less on average than they did in February. Tepid pay increases have been a drag on the economy since the Great Recession ended nearly six years ago.

Many Americans remain out of the labor force, partly because many baby boomers are reaching retirement age. The percentage of Americans who are either working or looking for work fell in March to 62.7 percent, tying the lowest such rate since 1978.

Job growth had been healthy for more than a year before March. Yet the streak of strong hiring, along with cheaper gasoline, hasn’t significantly boosted consumer spending.

The Fed signaled last month that it would be cautious in raising rates from record lows. The Fed has yet to rule out a June rate hike. But many analysts expect the first increase no earlier than September. In part, that’s because Fed officials have revised down the range of unemployment they view as consistent with a healthy economy to 5 percent to 5.2 percent from 5.2 percent to 5.5 percent previously. The weak hiring last month could give them further pause.

Chair Janet Yellen has stressed that even when the Fed begins raising rates, it will do so only very gradually.

A Fed rate hike would point to stable growth. But the economy has weakened in the first two months of 2015, in part because of the tough winter.

The Atlanta Federal Reserve estimates that growth was flat during the first three months of 2015. JPMorgan Chase says that growth is tracking at an annualized rate of 0.6 percent. Those forecasts are significantly below the annual growth rate of 2.2 percent in the final three months of 2014 and a rate of more than 4 percent in the middle of last year.

Factory orders have been mixed, having dropped sharply in January before ticking up modestly in February. Cheaper oil has led energy companies to halt orders for pipelines and equipment, hurting manufacturers. At the same time, the strengthening dollar has made American-made goods costlier abroad, thereby cutting into exports.

This year’s job growth has yet to ignite a larger boom in consumer spending. McDonald’s, Wal-Mart, the Gap and other major employers have announced raises for their lowest-paid employees. But those pay raises are staggered and unlikely to fuel faster wage growth.

The economy has disproportionately added lower-paying jobs in the retail and restaurant sectors since the economic recovery began in mid-2009. Adding jobs in the lowest-paid industries can suppress average hourly wages, even when employers are rewarding cashiers, waiters and sales clerks with pay bumps.

The rise in lower-paying jobs hasn’t been enough to boost home sales. Housing prices have surged faster than wages since 2012, when the real estate market bottomed.

But bars and restaurants added just 8,700 jobs in March, compared with 66,000 in February. Retailers stayed close to their 12-month average by adding 26,000.