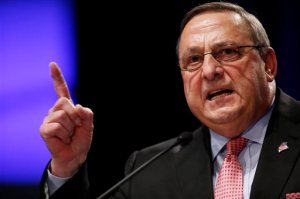 FILE- In this Jan. 7, 2015 file photo, Republican Gov. Paul LePage delivers his inauguration address in Augusta, Maine. LePage’s contentious proposal to tax nonprofits has sparked a fiery debate in Maine over what impact nonprofits have on their communities and whether they should have to shoulder the costs for municipal services they consume. (AP Photo/Robert F. Bukaty, file)

The number of people that have been dropped from the program has exceeded even the administration’s expectations.

About 12,000 adults who aren’t disabled and don’t have children were in the program before Jan. 1. That number has dropped to 2,680 this month, David Sorensen, spokesman for the Department of Health and Services, told The Associated Press.

Advocates for the poor say there aren’t enough jobs and volunteer positions available to recipients, especially in rural areas, forcing them to lose their benefits and turn instead to their local food banks.

“Northern Washington County really has never come out of the recession, so there aren’t economic opportunities that there might be in other parts of the state,” said Barbara Chatterton, a case manager at the Down East Aids Network in Machias who says many of her current and former clients have been impacted by the change.

Since October, healthy adults without children have been required to work at least 20 hours a week, volunteer or participate in a work-training program to continue receiving benefits in the Supplemental Nutrition Assistance Program after three months. It’s the result of the administration’s decision to no longer seek a waiver for the federal requirement, which it had used since 2008.

Helen Hanson got a letter from the state in January saying she was about to lose her food stamp benefits, she said, even though she should be exempt because she’s in a work-skills program.

The 49-year-old, who’s studying at Husson University to become a paralegal while working part-time at a grocery store, was eventually able to save her benefits with the help of an advocacy group. But the process she was forced to go through was infuriating and the fear that she might lose that support system was nerve-wracking, she said.

“We’re not criminals,” Hanson said. “I’m trying to benefit myself so I can get off food supplement. I’m tired of being poor.”

DHHS Commissioner Mary Mayhew said the goal of the requirements is to encourage people to find work. It’s possible that some of those people no longer on the program have found jobs so their incomes make them no long eligible for benefits, she said.

“If you’re on these programs it means you are living in poverty and so the more that we can help incentive people on that pathway to employment and self-sufficiency the better off they’re going to be,” she said.

The department had estimated that about half of the 12,000 people impacted by this change would eventually be removed from the program, Sorensen said. By January, about 6,500 fewer people were on the program. Once someone loses their benefits, they’re ineligible for assistance for three years.

Maine was one of at least eight states that declined to use the federal waiver this year out of the 37 states that had been eligible, according to the U.S. Department of Agriculture’s Food and Nutrition Service. The Center on Budget and Policy priorities, a left-leaning think-tank in Washington D.C., estimated in January that about 1 million people nationwide would be removed from the program as a result of those changes.

A census report released this month shows that Maine had one of the highest participation rates in the food stamp program in 2013 at 18 percent. Only Oregon and Mississippi higher rates that year, according to the report.

Democratic Rep. Scott Hamann of South Portland, who’s also the Cupboard Collective Program manager at Good Shepherd Food Bank, has introduced a bill that would direct the administration to seek a waiver in certain counties that have high unemployment or a lack of jobs.

Follow Alanna Durkin at http://www.twitter.com/aedurkin
Copyright 2015 The Associated Press. All rights reserved. This material may not be published, broadcast, rewritten or redistributed.