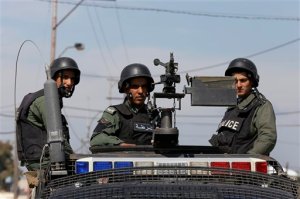 Members of the Jordanian government forces patrol the border with Syria near the Nasib crossing in the town of Jaber, north of Mafraq, Jordan, Thursday, April 2, 2015. Syrian rebels and fighters from the al-Qaida-affiliated Nusra Front have captured the only functioning border crossing with Jordan and three nearby military posts, prompting Syrian government bombing raids on the area, activists said Thursday. The Jordanian government closed the Nasib crossing Tuesday night for security reasons. (AP Photo/Raad Adayleh)

BEIRUT (AP) — It was a bruising week for Syria’s Bashar Assad. The rapid collapse of his forces on two fronts in the north and south brought the opposition its biggest victories in two years, raising serious questions about the president’s ability to fend off increasingly sophisticated rebel campaigns.

After losing the capital of Idlib province in northwestern Syria this week, government forces on Thursday lost major ground in the south, where rebels captured the only functioning border crossing with Jordan, a crucial gateway for Syria’s government.

For some observers, the successive losses represent a shift in Syria’s four-year civil war — suggesting Assad’s forces were overstretched and pointing to a new unity and assertiveness by opposition forces, which had long been plagued by divisions.

The opposition drive is being led largely by al-Qaida’s branch in Syria, the Nusra Front. The group has long been among the strongest opposition forces, and in the recent moves it has shown greater coordination with other rebel factions. All told, the Nusra Front and its rival, the Islamic State group, now control roughly half of Syria, raising concerns about the country’s future.

On Wednesday, Islamic State militants made their deepest foray yet toward Damascus, briefly seizing parts of a Palestinian refugee camp on the edge of the Syrian capital.

While they do not yet threaten Assad’s hold on power, the rebel gains are likely to raise further questions among frustrated supporters about his ability to end the war.

“The apparent collapse of government defenses in Idlib has punched a gaping hole in the government’s narrative of approaching victory and boosted the opposition politically as well as militarily, spelling trouble for Bashar Assad,” wrote Syria expert Aron Lund in an article published on the Syria Comment blog.

On Thursday, plumes of smoke billowed from the Syrian side of the border with Jordan, as Syrian warplanes and helicopters bombed the areas, trying to slow down the advances by rebels who seized the Nasib border crossing.

Nasib is an important route for Damascus to get essentials and for merchants and businessmen as a way to export to the Gulf. A prolonged closure will increase the stranglehold on an economy ravaged by four years of war. Last week, rebels captured the strategic nearby town of Busra Sham, posing in front of its historic citadel and Roman theater in another punch to government supporters.

The biggest blow to the government however, came from the north with the rebel capture of the city of Idlib last weekend after a four-day assault.

The government had held the mainly Sunni city since Syria’s conflict began four years ago even as most of the surrounding countryside fell into rebel hands. Damascus had often boasted of keeping hold of all the provincial capitals with the exception of Raqqa, in the east, which fell in 2013 and is now the de facto capital of the Islamic State group.

The Idlib attack was led by a coalition of rebel forces led by Nusra, along with the hard-line Ahrar al-Sham and Jund al-Aqsa groups, believed to be largely backed by Turkey, Saudi Arabia and Qatar. In an audio statement Wednesday, Nusra’s leader Abu Muhammed al-Golani said Idlib would be ruled by Islamic Shariah law but vowed that his group would not seek to monopolize power in the city, urging rebels to remain united.

According to some activists, the groups have received an infusion of new weapons and logistical support meant to pressure Assad and his Iranian backers as part of the Sunni-Shiite proxy war playing out in the region, with Yemen as its latest arena.

“There is no question that we live in an interactive region,” said Hilal Khashan, political science professor at the American University of Beirut, adding that the Saudis were pushing via Jordan for the rebel offensive in southern Syria.

Saudi Foreign Minister Prince Saud al-Faisal said Tuesday that Arabs and other states should work to establish “a military balance on the ground to force the butcher of Damascus to respond to a peaceful solution at a time he is insisting on military victory.”

In the Idlib offensive, the Syrian government accused Turkey of opening the way for thousands of rebels to reach the battle zone.

An estimated 4,000 to 5,000 rebels are believed to have taken part in the attack under a unified command known as Jaysh al-Fateh, or Conquest Army, storming the city from three sides.  They were supported by heavy weaponry seized from defeated government forces and reportedly used U.S.-made advanced TOW missiles seized from moderate rebels in earlier clashes.

Within four days, the militants were in control of the city of 165,000 people, as thousands of its residents fled for safety in government-held areas.

“It was a real war,” said a pro-government Sunni resident who fled shortly before Idlib fell. He described hundreds of “bearded men” — a reference to Islamic militants — arriving in the city.

“I left in the last moment when I realized my end will be death. We did not want to die this way,” he said by phone, asking that his name not be made public for fear militants might harm relatives still in Idlib.

The fighters who moved in were organized and refrained from flagrant acts of provocation, though several residents reported that militants entered Idlib’s Saint Mary Orthodox church, made the Islamic call for prayers and detained and humiliated a local priest.

Strategically, the capture of Idlib helps open the way for rebels to put more pressure on government forces in the nearby province of Aleppo, as well as the coastal Latakia province that includes Assad’s hometown.

The rebel wins in part reflect the back-and-forth nature of the war from the start.

Still, it is definitely a change from not long ago when Assad’s forces had momentum and seemed unbeatable. The battle for Idlib also underscored how deeply the government relies on Shiite militiamen and Lebanese Hezbollah guerrillas. They were not present in the battle to back up Assad’s forces in the city.

“The battle was an important test of the regime’s ability to execute its military strategy, and the test failed,” wrote Jeffrey White, an analyst with The Washington Institute for Near East Policy.

A Middle East-based Western diplomat said Assad is being challenged internally by growing dissatisfaction among the government’s own support groups because of his unwillingness to enter into a political settlement, the downward economic situation and high death toll, particularly among his own Alawite constituency.

Still, the diplomat said there is nothing to suggest that would shake the government’s “either us or nothing” line when it comes to a political settlement. He spoke on condition of anonymity as he wasn’t authorized to brief journalists.

Lund said Assad’s forces have been taken down a notch.

“It seems that Assad is still trying to bite off more of Syria than he can swallow,” he wrote. The Idlib defeat “underlines how dangerously overstretched his regime has become.”